Mergers and acquisitions in the post covid19 aerospace world

As businesses cope with the human and financial toll of the coronavirus pandemic and survival becomes top priority, deal making is expected to slow significantly across industries. Last year was another banner year for mergers and acquisitions (M&A) in the aerospace and defense industry, but the headline for 2020 will look much different as the world grapples with the COVID-19 situation and the ensuing uncertainty and demand impacts. The aerospace sector, especially airlines and the commercial aerospace value chain, will be heavily impacted.

The first quarter of this year did see a handful of large deals, but it was a story of two halves as the virus started taking hold of global consciousness by mid-February. The momentum from 2019 was always expected to eventually slow as the industry digested some mega deals, and as disruptors such as growing debt loads, changing geopolitics, the 737 MAX grounding, and environmental concerns around air travel created serious turbulence. The expectation was for the sector to see a different kind of M&A activity, shifting from mega defense mergers to supply chain- and technology-related consolidation.

However, the growing global spread of COVID-19 has had a sudden and colossal impact, with many countries under lockdown, air travel volumes dropping precipitously, and manufacturing plants having to temporarily shut down either due to illnesses, safety concerns, or reduced orders. M&A activity is expected to be in a holding pattern in the short term due to uncertain business and financial perspectives. Additionally, some deals that were in the works but had not closed may be called off because of business outlook changes, uncertainty around revenue forecasts, or an inability to justify the multiples required for returns to sellers. The mutual termination of the planned merger between Woodward and Hexcel Corp is just the first example.

A look back at new peak

M&A activity has increased steadily since 2012 and it reached a new peak in the second quarter of 2019 with the “merger of equals” between Raytheon and United Technologies. The merger, which closed in early April 2020, has effectively created not only one of the world’s largest aerospace companies but the largest “platform-agnostic” aerospace company.

Owing in large part to this marriage between the two heavyweights, 2019 was a standout year for M&A in terms of the total number and value of deals, multiples, and private equity-driven deals, breaking the records set in 2018. The total value of deals announced in 2019 was $132.8 billion to $131.4 billion in 2018. 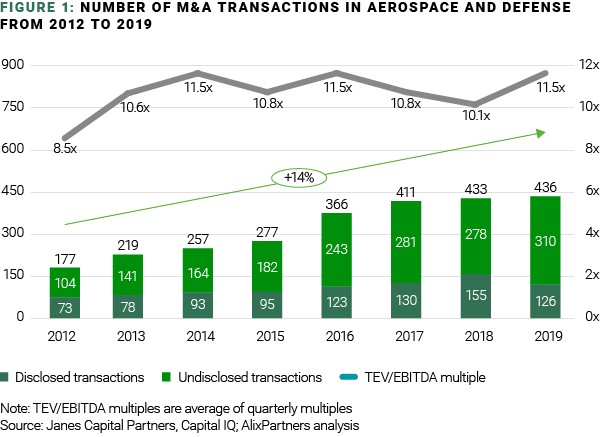 EBITDA multiples reached a new peak in 2019 (figure 2). The strongest positive trends in multiples were observed in the areas of logistics; maintenance, repair, and overhaul; and distribution, while the most negative trends came in engineering and project management and machined and cast parts. 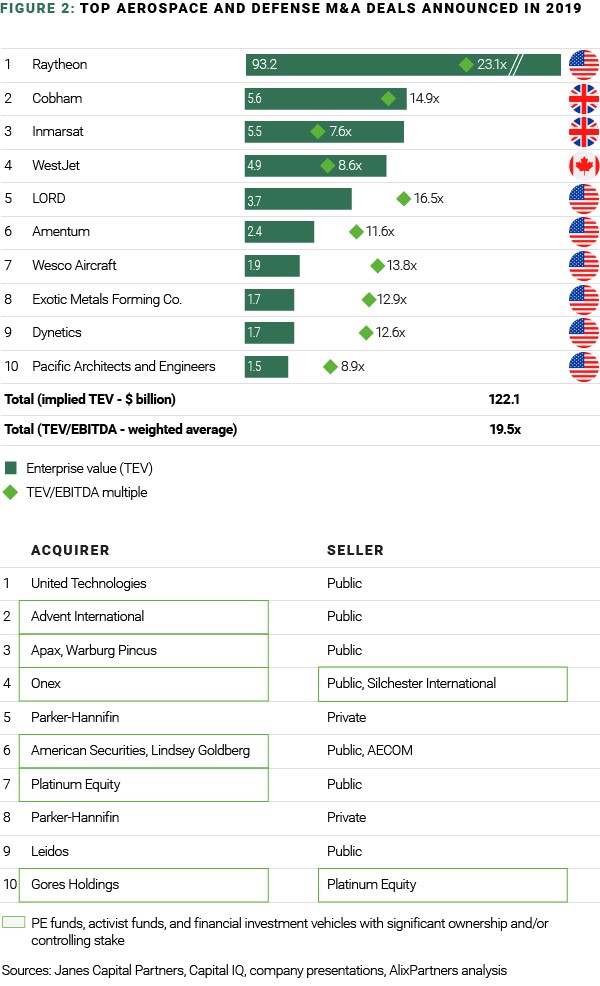 M&A activity in aerospace and defense will be slow over the next few months, if not silent. The priority for PE firms is to evaluate the impact of COVID-19 on their portfolio companies – assessing if they have enough cash at hand to weather the crisis, and if not, how more liquidity can be created. Well-funded serial acquirers will wait until conditions become more favorable for buyers and this is when they will start looking for high-value, distressed assets. In the near term, many down-market suppliers may find themselves in troubled waters due to both OEM rate reductions and the collapse of the aftermarket driven by COVID-19 demand impacts. Ultimately, this may trigger a reconfiguration of the Tier 2 and Tier 3 supply chain landscape, with a need for consolidation and capital injection.

For the moment, even if there was an appetite for acquisitions, the constraints in the credit markets are likely to reduce flow until there is business and economic clarity. With liquidity becoming top priority for companies, banks will reprioritize, and debt financing for M&A purposes will abate.

While recent large deals had led to a steady stream of divestitures due to either regulatory requirements or portfolio-shaping activity, most of this work is already winding down. One area that may still see some activity is technology-related portfolio realignment by larger cash-stable firms as smaller players rich in tech assets start to struggle. There may be some unplanned acquisitions as some distressed suppliers in the value chain are absorbed by clients or competitors.

But overall, traditional mergers and acquisitions activity is expected to abate as the industry addresses more urgent concerns considering the global situation and works on rebuilding over the next few months. The more urgent questions for firms center around determining the top-line impact of the crisis, its cashflow implications, and the measures needed to resize the business and survive.