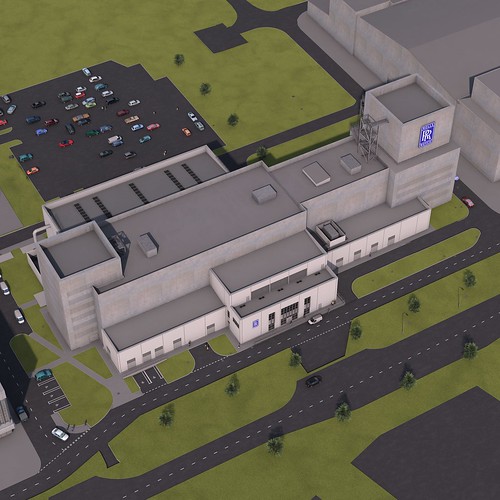 Rolls-Royce today welcomed Business Secretary, Greg Clark to Derby to celebrate the start of work on its new testbed facility. The plans for the testbed were announced in June 2017 as part of a wider £150m investment in UK aerospace facilities.

The new testbed, which is expected to be commissioned in 2020, will support Rolls-Royce’s ongoing industrial transformation and will provide important additional capacity as the civil aerospace business continues to ramp-up engine production and deliver on a record order book.

Capable of testing a range of today’s engines, including the Trent XWB and the Trent 1000, the facility will also serve as a base for testing UltraFan®, Rolls-Royce’s engine for the next generation of aircraft.

The new testbed, which will be the largest indoor facility of its type in the world, will harness the latest digital technology to set conditions and obtain evidence from a wide variety of test activities, such as water ingestion and endurance testing. It will also benefit from the latest advancements in test equipment including new x-ray capabilities.

The testbed itself will have an internal area of 7,500m2, making it larger than a Premiership football pitch, and will be surrounded by two concrete walls which measure up to 1.7m thick.

The decision to invest in Derby, the home of Rolls-Royce’s civil aerospace division, was underpinned by a constructive dialogue with senior union representatives in the UK and will help to sustain more than 7,000 Rolls-Royce jobs across the East Midlands.

Chris Cholerton, Rolls-Royce, President – Civil Aerospace, said: “We are proud to welcome the Secretary of State to Derby to celebrate this important milestone with us. It comes at a pivotal moment for our civil aerospace business as we ramp up production to record levels and look forward to completing a hat-trick of new engine launches, with the Trent 7000 set to enter service later this year. This new facility will not only give us the capacity and flexibility to deliver on our growth plans but also sustains employment across the region.”

Business Secretary Greg Clark said: “The ground-breaking of this new testbed facility is a reminder of Rolls-Royce’s commitment to Derby and the UK, and signifies the next chapter in Rolls-Royce’s proud history. The highly talented workforce in Derby will spearhead Rolls-Royce’s ambition to increase engine production to record levels and ensure the UK remains at the pinnacle of engineering and aerospace excellence. This revolutionary facility is exactly the type of investment our modern Industrial Strategy will continue to attract.”

Rolls-Royce currently employs around 22,300 people in the UK, across a range of skilled jobs, including more than 600 apprentices, and, through it supply chain, supports more than 40,000 jobs across the East Midlands region.

In addition to the Trent XWB engine, which powers the Airbus A350 and is the world’s fastest selling widebody engine ever, Rolls-Royce assembles the Trent 700, Trent 900 and Trent 1000 engines in Derby, powering the Airbus A330, Airbus A380 and Boeing 787 Dreamliner respectively.

The new testbed supports the IntelligentEngine vision recently outlined by Rolls-Royce by bringing together the latest in digital and physical testing technology to ensure Rolls-Royce is best placed to deliver passengers more reliably and more efficiently than ever before. In addition to designing, testing, and maintaining engines in the digital realm, the IntelligentEngine vision sets out a future where an engine will be increasingly connected, contextually aware and comprehending, starting from its time on the testbed.

Rolls-Royce today also welcomed the UK Government’s announcement of support for research projects that will help Rolls-Royce and its partners develop more efficient, technologically sophisticated aircraft engines such as the new UltraFan®. Rolls-Royce will also be investing more than £34m in these new technologies, which include developing advanced control systems for the engine.