During the DAS 2019, Russian Helicopters Holding Company signed with the Emirati Tawazun Holding Company an agreement on the basic terms of the transaction of the purchase of a stake in VR-Technologies. The document was signed by Director General of Russian Helicopters Andrey Boginsky and  Director General of Tawazun Tareq Abdul Raheem Al Hosani. The agreement defines the main parameters of the future transaction, including the stake to be acquired by the UAE investor;  Tawazun will become the owner of half of the shares of VR-Technology company, which is developing promising helicopters and unmanned aerial vehicles. The transaction is planned to be finalized in the 1st quarter 2020. Upon the acquisition of a stake in VR-Technologies, Tawazunrepresentatives will enter the company's Board of Directors, and their rights will be equal to those of the members representing Russian Helicopters.

“I am sure that the investments of our partners will fasten thedevelopment of VRT300 and VRT500 projects and will give impetus to new developments of advanced helicopter and UAV systems. Our agreements also provide cooperation in promoting these products in the markets of the Middle East and GCC in particular. Both rotorcrafts have good prospects in the region, where solutions for the development of urban air mobility are becoming increasingly popular",noted Sergey Chemezov, CEO of Rostec State Corporation. 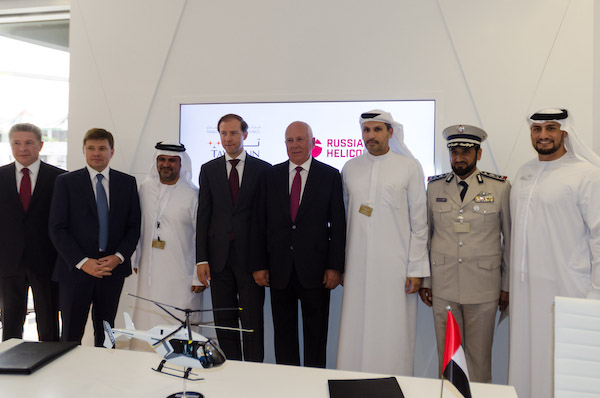 “The agreement signed today lays the foundation for long-term cooperation in the format of not just colleagues, but business partners. With the support of Rostec State Corporation and RT-Business Development, we were able to achieve full understanding with Tawazun, without which it would be impossible to implement such significant and large-scale projects. As equal partners, we plan to invest at least 400 million euro in the development of VR-Technologies, which will help make the company's products competitive and in demand all over the world," said Andrey Boginskiy, Director General of Russian Helicopters Holding Company.

The International Dubai Air Show is the first foreign site to showcase the VRT500 project. The model of the helicopter is presented at the joint exposition of Russian Helicopters and Tawazun Holding Company. The helicopter has the largest passenger and cargo cabin in its class with a total capacity of up to 5 people. At the same time, the outline dimensions of the rotorcraft were reduced due to the coaxial rotor placement, which permits to operate the helicopter in the restrained urban conditions.  VRT500 is equipped with a modern avionics complex based on the “glass cockpit” principle, and its key systems were developed by the best international manufacturers.