Surf Air Mobility has entered into a definitive agreement, subject to closing conditions and regulatory approval, which will result in a merger with Southern Airways Corporation, parent company of one of America’s largest commuter airlines. Southern Airways serves 39 cities across the Mid-Atlantic, Gulf South, Rocky Mountains, West Coast, New England, Hawaii, and soon the Far Pacific. The merger will establish the Company as the country’s leading air mobility platform with scheduled routes and on-demand charter flights operated by Southern and other third-party operators.

The definitive agreement coincides with Surf Air Mobility’s announcement that it plans to go public through a merger with Tuscan Holdings Corp. II, subject to the satisfaction or waiver of certain closing conditions.

One more great news - Surf Air Mobility has entered into contracts with magniX, a leader in electric aviation propulsion, and AeroTEC, a premier aircraft development and integration company, to develop and certify hybrid and fully-electric powertrains for new and existing Cessna Grand Caravan aircraft. These hybrid and fully-electric aircraft will be designed to reduce operating costs and emissions and greatly improve the affordability of regional air mobility.

The merger with Southern Airways, along with its affiliated brand, Mokulele Airlines, will enable the combined companies to create a national air travel platform and to accelerate efforts to commercialize hybrid electric aircraft. The ability to serve more consumers through the integration with Southern, the largest passenger operator of Cessna Caravans in North America, provides Surf Air with a powerful foundation to introduce its proprietary electrified powertrain technology to the market. 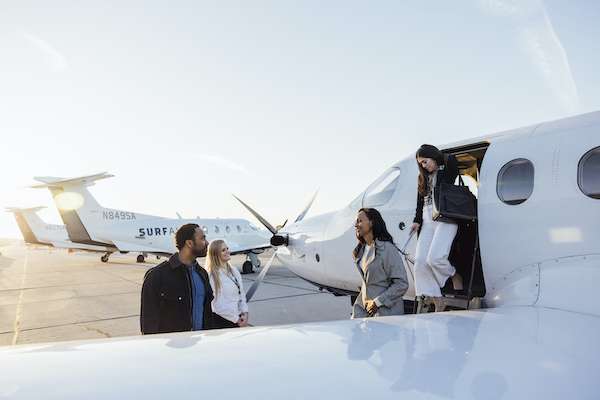 Surf Air Mobility intends to upgrade Southern’s current fleet of nearly 40 Cessna Grand Caravans to hybrid electric aircraft using technology developed along with magniX and AeroTEC, two pioneers and market leaders in aviation innovation and electrification. Cessna Grand Caravans are the most prolific aircraft in their category, with over 2,800 delivered.

“Southern Airways sees the regional routes between 50 and 500 miles that we’re currently flying as the quickest, most practical solution for bringing electric air travel to market. We’re excited to be a part of Surf Air Mobility’s mission to electrify aviation and to bring sustainable innovation to market faster,” said Stan Little, Chairman and CEO of Southern Airways, who will continue to run the airline post-merger and will serve as president of Surf Air Mobility.

“The addition of Southern Airways will allow us to more rapidly bring green flying solutions to real flyers,” said Carl Albert, Chairman of Surf Air Mobility. “Southern’s fleet of Cessna Caravans will be the foundation for the next generation of aircraft as we upgrade the fleet to hybrid electric powertrains. Our first generation of electrified aircraft will meaningfully decarbonize aviation and help alleviate the environmental impact of flying by targeting emission reductions by as much as 25 percent versus conventional propulsion systems.”