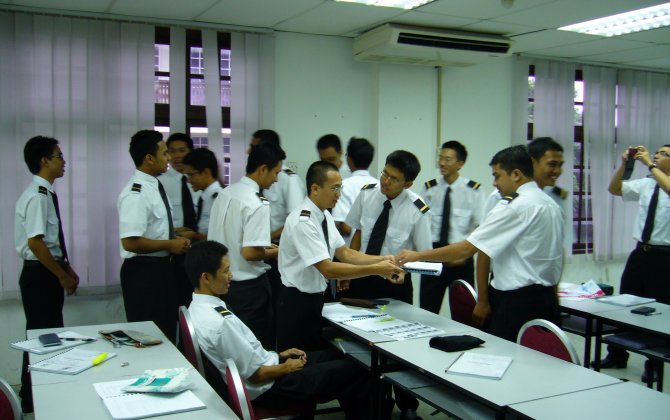 The outback Australian airstrips of Glenn Innes and Mangalore were built to repel potential Japanese invaders during World War II. Now, these runways and some near California's wine country and in Arizona are looking to welcome droves of Asia's student pilots.

These schools -- some planned and some already operating -- are aiming to tap the boom in commercial aviation in Asia, where a growing middle class with an itch to travel has made it the world's largest market by annual passenger counts, according to the International Air Transport Association. But that surge has left carriers short of pilots, and safety concerns have underscored the need for good schools.

World-wide, the United Nations' International Civil Aviation Organization says as many as 8,000 new students a year are needed at commercial flight schools to keep up with demand, primarily from Asia. Recent training-academy acquisitions indicate that establishing schools to accommodate those needs could cost more than US$3 billion. Training a pilot takes about a year, depending on the student's aptitude.

Asia has few flight schools or instructors, and the U.S. and Australia are popular places to train cadets because of their strong safety records. Fatality rates per one million departures for large commercial passenger aircraft from 2009 through 2013 were 29.9 for Asia, and 1.2 for North America, according to the United Nations' International Civil Aviation Organization.

The pilot training crisis is growing so acute that even manufacturers such as Boeing Co. and Airbus Group SE have begun calling for global action to develop more schools. Without new pilots, some of the 14,330 new planes Boeing predicts Asian airlines will need across the next 20 years won't be able to be put into service, costing manufacturers billions in lost orders. In total, Boeing forecasts Asian airlines need 226,000 new pilots in the next two decades, more than North America, Europe and Africa combined.

Among the student pilots at the Australian Wings Academy, a school near the Gold Coast, is Kelvin Hsu, a 38-year-old former office worker from Taipei, Taiwan. He says that last year, after he quit his job and left his family to chase his dream of being a pilot, he chose the Australian school over an Asian one because he felt the best airlines would hire only those pilots trained overseas.

"I decided to come here to get a higher-quality pilot training," he says, adding that he expects his job prospects are good. "By the end of my training there will be a huge pilot shortage."

Despite the boom, however, it is tough to make a profit training pilots.

New colleges require fleets of aircraft, runway refurbishments and boarding houses. After that, operators still face the difficulty of getting contracts with airlines - task that can be fickle because the business is cyclical. Many schools are small, training 100 students or fewer, making profitability a challenge.

School operators also complain that some students have fabricated English credentials, which can make training more time-consuming, because the instruction must begin at a more rudimentary level, and more costly, because full-time English tutors might be needed.

Phil Sweeney, who runs a pilot training academy in California's Napa Valley, plans to double its student numbers to 400 in the next few years. But he adds that this isn't likely to solve Asia's pilot shortage because many other schools are struggling to stay open.

"It is a very risky area to get into," says Mike Drinkall, general manager at the CAE Oxford Aviation Academy in the suburbs of the Australian city of Melbourne.

New schools are banking on scale to help them succeed, and looking to take over remote airports in the U.S. and the Australian outback to cut the costs often associated with training pilots at busy city airports.

CAE this year announced a rare deal to train as many as 650 China Eastern Airlines Corp. cadets during the next five years. CAE, a Canadian training firm, sold a 50% stake in its Melbourne school to China Eastern for an undisclosed sum as part of the deal to ensure the two parties shared this risk.

In Glenn Innes, a town in Australia's New South Wales state once famed for tin and sapphire mines, a consortium known as Australia Asia Flight Training, led by airline veterans including the former deputy general manager of defunct national carrier Ansett Australia, reached a deal with the local council to take over the airport there.

The consortium is trying to raise about 25 million Australian dollars, or roughly US$18 million, to build the first stage of what could be the world's largest pilot training facility, with the potential through further investment to train 1,000 new pilots each year. The students would mostly come from Asia, according to Neil Hansford, one of the businessmen behind the project. The school plans to seal contracts with airlines after its facilities are built, Mr. Hansford said.

In Kempsey, an old sawmilling town less than 200 kilometers away from Glenn Innes, Hainan Airlines Co., China's biggest privately owned carrier and its fourth-largest in terms of fleet size, recently announced a plan to build a 300-cadet-per-year pilot academy at the small local airport.

China Southern Airlines Co., which has grown to become Asia's largest carrier, already trains 250 cadets a year at a college in the Western Australian wheat farming town of Merreden, and roughly 100 more in a remote former military base in Mangalore near Australia's southeastern seaboard.

New pilot training schools are also popping up across the U.S. In California's Napa Valley wine district, Mr. Sweeney in 2014 reopened a training academy that had failed when it was operated by Japan Airlines Co., which spent roughly two years in bankruptcy protection starting in 2010, mainly because of its high debt combined with a slump in travel after the global financial crisis. Mr. Sweeney plans to rapidly ramp up capacity to keep costs down.

TransPac Aviation Academy at Deer Valley Airport near Phoenix has also been strengthening its relationship with Hainan Airlines, and now aims to train about 400 Chinese pilots each year.

Pratt & Whitney celebrated the delivery of the first A321 passenger to freighter conversion aircraft (A321P2F) powered by V2500® engines, along with Elbe Flugzeugwerke (“EFW”)...

Safe transport of contagious patients is essential to in order to utilize hospital capacity during the second wave of Covid19. Today President Ursula von der Leyen announced that the European Com...

airBaltic to Maintain Essential Connectivity for the Baltics During Winter

As of October 25, the winter schedule of Latvian airline airBaltic is now in force. During this season, airBaltic plans to connect Riga with 40 destinations across its network, off...