Lufthansa Technik handed over the first of three new Airbus A350-900s to the German Armed Forces. During a small ceremony in Hamburg, conducted according to current pandemic rules, Minister of Defence Annegret Kramp-Karrenbauer took a first look at the future flagship of the Federal Ministry of Defence's (BMVg) Special Air Mission Wing. On the way to the final operational readiness of the aircraft, the military certification for the 10+03 designation and various test flights with the new wide-body aircraft will take place in the coming weeks. This is the world's first government aircraft of this type and thus also the world's first Airbus A350 not to be used in commercial airline service.

"The exemplary procurement process is really something to be proud of," said Minister Kramp-Karrenbauer. "The decision to purchase the new A350 fleet was made just 1.5 years ago. My thanks therefore go to all those involved in industry and German Armed Forces, because everyone really pulled together here. With its 25 percent lower fuel consumption - compared to older, comparable types - the ultra-modern A350 is future-oriented, and with the new fleet we are securing global mobility as an important part of the Federal Government's ability to work", the Federal Minister continued. "And with the addition of two more brand-new A350s, the mobility expected of an industrial nation like Germany is adequately ensured."

"Today we are proud to present to the Federal Minister of Defence the new flagship of the Federal Government's Special Air Mission Wing, the world's very first Airbus A350 as a government aircraft," said Dr. Johannes Bussmann, Chairman of the Executive Board of Lufthansa Technik AG. "The 10+03 and its two subsequent sister aircraft are a continuation of the successful tradition of supplying the German Armed Forces and having them as one of our best and most important customers."

The factory-fresh aircraft, which was still on the civil register as D-AGAF, arrived at Lufthansa Technik at the beginning of May. It is equipped with a special transitional cabin for political-parliamentary flight operations. The cabin comes with office and conference areas, adjoined by a multifunctional lounge area. The remaining space is available for delegations flying on the aircraft. After sister aircraft 10+01 and 10+02, which are currently under construction, will receive a fully-fledged government cabin from Lufthansa Technik next year, the transitional cabin in the 10+03 will also be exchanged.

The effects of the global coronavirus pandemic on the supply chain slightly delayed the planned delivery of the 10+03 to the German Armed Forces. It will now take place in the coming weeks, during which the aircraft will receive its military certification and be prepared for a smooth entry-into-service at the Federal Ministry of Defence's Special Air Mission Wing, complete with crew training and various test flights. 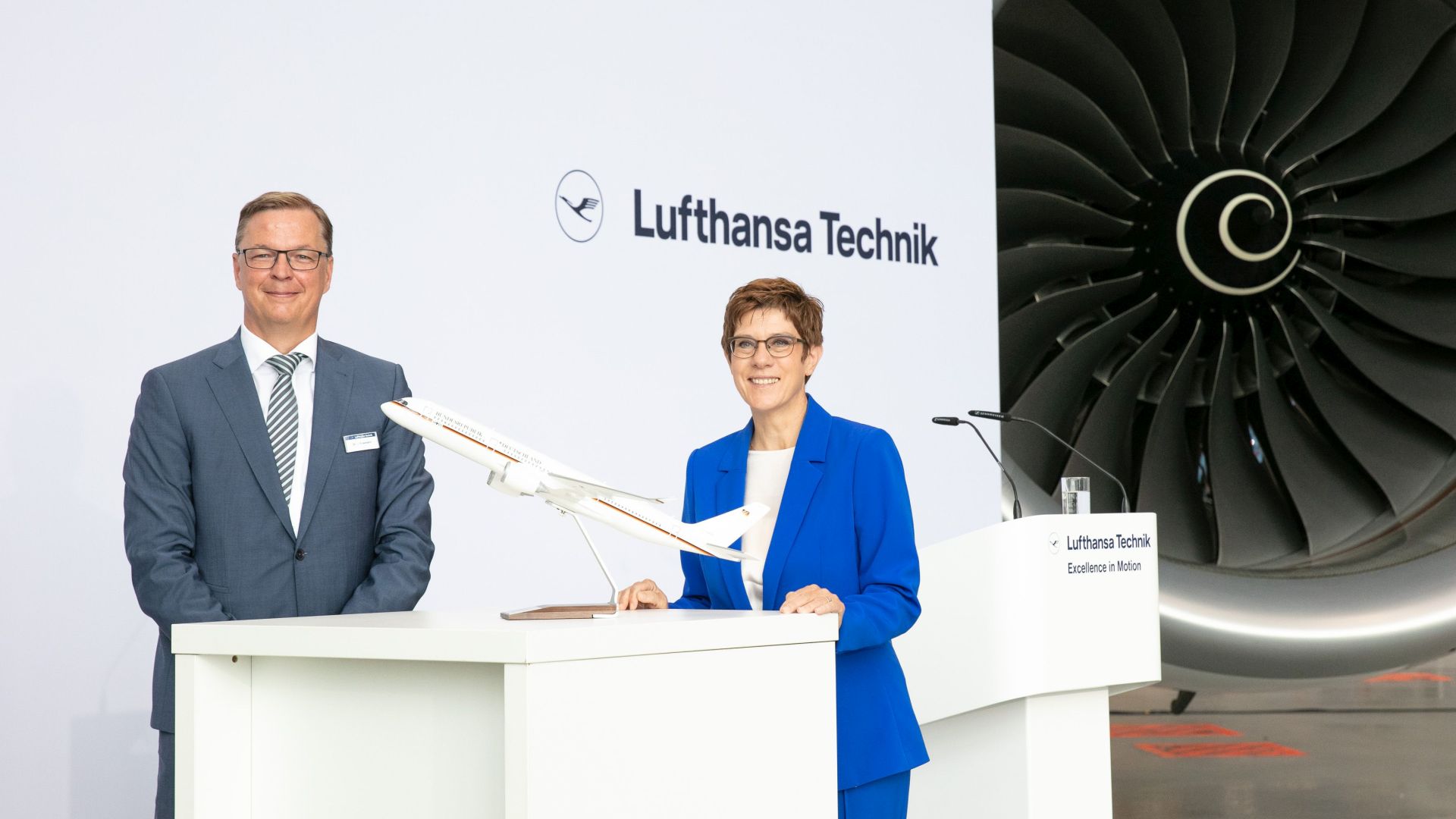 Loading comments for Handover of the first Airbus A350 to the German Federal Government's Special Air Mission Wing...