Within the scope of an investment package, Lufthansa Aviation Training targets at modernizing its training fleet as well as at upgrading of locations like European Flight Academy’s pilot school at Rostock-Laage airport.

After acceptance, a team of experts from LAT ferried the two new DA42-VI training aircraft of the Austrian manufacturer Diamond Aircraft Industries from Wiener Neustadt to Rostock-Laage – increasing the DA42-VI fleet to seven units on-site. EFA student pilots at the locations Bremen, Rostock-Laage, Grenchen (Switzerland) and Goodyear (Arizona) train with 57 LAT-owned training aircraft in total. Additionally, they have a pool of 50 training aircraft at their disposal at the partner pilot school Flight Safety Academy in Vero Beach (Florida). 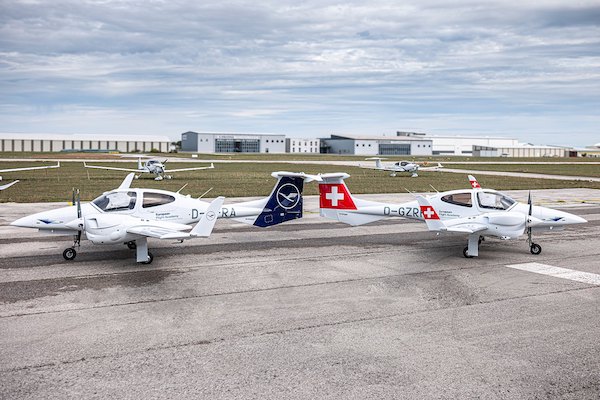 Both new aircraft are painted in the liveries of Lufthansa or SWISS. The flight route from Austria to Mecklenburg-Western Pomerania included a low-level flight at Frankfurt Airport, which in fact is Lufthansa’s largest hub. At arrival at Rostock-Laage airport they were greeted by the crew of Lufthansa CityLine flight LH2761.

The DA42’s are ideal for instrument rating training on multi-engine aircraft. The piston twins are equipped with a weather-radar and an iPad-interface to the aircraft’s avionics plus a de-icing system that allows training flights into moderate known icing conditions. Thanks to the two 168 horsepower AUSTRO jet-fuel-engines AE300, the aircraft is very quiet and consumes around one-third less fuel while performing a 50 percent higher rate of climb in case of a simulated engine failure.

Matthias Lehman, Managing Director of Lufthansa Aviation Training Pilot Academy, which also includes the Rostock-Laage training site, ferried one of the airplanes himself and is very pleased about the new additions to the training fleet: “It is very important for us to prepare our cadets as good as possible for the challenges in their pilot profession. For that matter, exercising on modern training aircraft plays an important role. Also, the upgrade of Rostock-Laage’s fleet is a commitment to the location, where, due to a well-developed infrastructure and high density of surrounding airfields with various approach procedures, ideal training conditions exist.”

Amila Spiegel, Sales & Marketing Director at Diamond Aircraft Industries GmbH, the company’s headquarters in Wiener Neustadt, Austria: “We are proud of our long-standing relationship with Lufthansa Aviation Training. The DA42-VI is currently the most modern and safest aircraft for multi-engine flight training on the market. While students and instructors will appreciate its performance, safety, modern design and Garmin G1000 NXi glass cockpit, LAT will benefit from its fuel efficiency and corrosion-proof all carbon fibre airframe."

Nearly 1,000 DA42’s have been delivered since its introduction more than 14 years ago, outselling all other certified piston twins combined. The all-carbon composite DA42’s are equipped with efficient, clean and reliable jet fuel Austro engines AE300, Garmin G1000 NXi with 3-axis Automatic Flight Control System and optional electrically driven air conditioning. The multi-engine trainer is in operation at many leading flight schools, such as Lift Academy, Embry-Riddle Aeronautical University or FTE Jerez. 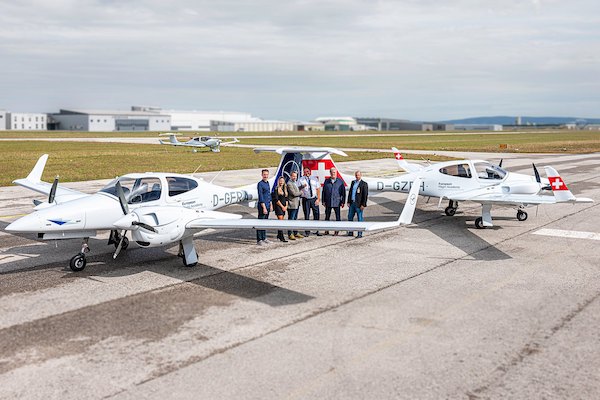