Sanad has successfully completed the maintenance of 100 GEnx engines on behalf of GE Aviation.Sanad was the first MRO partner within GE Aviation’s global services network to obtain MRO certification for the GEnx engine and remains the only certified GEnx MRO partner in the Middle East and North Africa region. In 2021, when the GEnx reaches 10 years of operation, Sanad will expand its existing maintenance and repair services to include the full overhaul of 315 GEnx engines until 2035.

“This achievement evidences Sanad’s distinguished engineering capabilities and our ability to continue providing the highest quality MRO service to global OEM partners,” said Mansoor Janahi, Deputy Group CEO of Sanad. “Despite current challenges facing the sector, we have strengthened our ability to meet the MRO requirements of our partners through strict adherence to the highest international standards. Our success underpins Abu Dhabi’s increasing profile as a global aerospace centre in specialised engineering services.”

With more than 2,000 engines delivered worldwide on the Boeing 787 Dreamliner and the Boeing 747-8, the GEnx is the fastest-selling, high-thrust jet engine in GE Aviation history. Due to rising GEnx demand, Sanad recently financed and leased its ninth GEnx engine through a sale-and-leaseback agreement with Etihad Airways, the UAE’s national carrier and one of the largest global operators of Boeing 787 aircraft.

Adam Boukadida, Chief Financial Officer, Etihad Aviation Group said: "Sanad has supported Etihad with the maintenance of 30 GEnx engines on average per year, which are used on its fuel-efficient fleet of Boeing 787 Dreamliners. Etihad and Sanad’s trusted partnership is testimony to the strength of the local aviation infrastructure, and the airline looks forward to continued collaboration as Sanad reaches for its next major milestone.”

“On behalf of the GE Aviation team worldwide, I wish to congratulate Sanad on reaching this historic milestone. We look forward to our continued partnership and meeting the MRO requirements of a growing global fleet,” said Dave Kircher, GE Aviation General Manager for the GEnx engine.

“The partnership between Sanad and GE Aviation is key to the growth of the region’s aviation industry ecosystem,” added Aziz Koleilat, GE Aviation Vice President of Sales & Marketing for Eastern Europe, Russia, Turkey and the Middle East region. “We recognise Sanad’s efforts and look forward to many more GEnx aircraft engine MRO service achievements in the future.”

With the Sanad and GE Aviation partnership dating back to 2013, the pair signed an AED500 million landmark maintenance services agreement for next-generation engines for narrow-body and wide-body aircraft last year. Under the agreement, Sanad will provide performance restoration overhaul services on the GEnx-1B engine, as well as continued, quick turn overhauls on CFM International’s LEAP engines for GE. CFM is a 50-50 joint company between GE and Safran Aircraft Engines.

Boasting the highest-pressure ratio compressor in commercial service today, the GEnx engine has the best fuel efficiency in its thrust class and up to 15 per cent better fuel burn than GE’s CF6 turbofan engine - key attributes enabling the GEnx to power many of the world’s longest aviation routes. 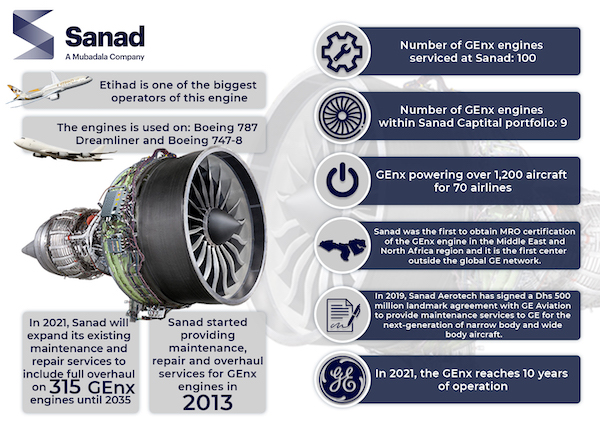