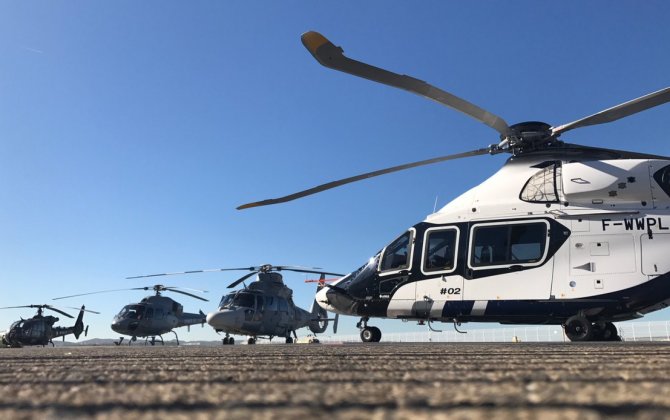 Mock-ups of helicopters, drones and the latest in intelligence centres and networks on show

Airbus Helicopters and Airbus Defence and Space will be showcasing an array of innovative defence and security solutions destined for the global market at their booth C158 in Hall 5A at Eurosatory this year.

Airbus Helicopters’ display includes a scale mock-up of the H160M that was selected in the frame of the French Joint Light Helicopter program (HIL) that aims at replacing six types of helicopters in service in the three French armies. A new generation aircraft, the H160 will enter into service in the French Armed Forces, giving them a modern and high performing helicopter that has a low logistical footprint and that will be operational for the next 30 years.

A scale mock-up of the H145M, alongside an HForce demonstrator, will also be on show. The H145M equipped with HForce recently performed ballistic and laser guided rocket testing ahead of delivery to launch customer Serbia later this year. The aircraft also recently demonstrated the highest level of manned-unmanned teaming (MUM-T) capabilities further enhancing its operational capabilities.

Also on display, the VSR700 is Airbus Helicopters’ rotary wing unmanned aerial system designed to fulfil the demanding requirements of global navies.  With the best coverage of any VUAS it can operate from small corvettes to major warships in the most demanding conditions.

Last but not least, Airbus Helicopters’ display is equipped with dedicated corners on its Fleet Availability Management, Material Management, and Hcare Services.

A scale mock-up of the Airbus Zephyr will be on show. Running exclusively on solar power and flying above the weather and above conventional air traffic, the Airbus Zephyr systems fill a capability gap and are complimentary to satellites, UAVs and manned aircraft providing affordable, persistent, local satellite-like services.

Full scale mock-ups of the Survey Copter mini tactical drones, DVF 2000 VT/ ALIACA and the DVF 2000 ER will be presented. The DVF 2000 VT / ALIACA provides a 360° panoramic coverage thanks to the positioning of its vertical turret, and can perform intelligence missions from 10 to 50 km range. The DVF 2000 VT / Aliaca in its previous version has been deployed by Special Forces worldwide and is perfectly adapted for maritime missions using a dedicated net landing solution.  With its thermal propulsion with electronic fuel injection, the DVF 2000 ER is a high endurance versatile system allowing 8 hours missions over a 50 kilometers range.

Airbus will be presenting its solutions for land and satellite communication networks that are already in use by the most modern armed forces worldwide. For the first time at Eurosatory, Airbus will perform demonstrations of its Hybrid Networks solution. This new generation of intelligent network solutions enables the aggregation of all of the infrastructure or tactical networks regardless of whether they are land, mobile or satellite based.

Specialist in intelligence integration, Airbus Defence and Space will also exhibit for the first time itsgeospatial intelligence centre which allows its customers to manage the whole intelligence process from the collection and visualisation to the utilisation and distribution of information on one single intuitive and secure platform. This centre provides its customers with the full capability and infrastructure to securely and effectively coordinate large-scale and complex defence missions with a large number of operators.

Airbus Defence and Space will also showcase the ‘Holographic Tactical Sandbox’, a highly innovative tool designed to facilitate mission preparation by providing a 3D holographic map viewable in an augmented reality helmet. Integrated into the chain of command, this tool provides an accurate 3D representation of the battlefield using information supplied by Airbus’ Fortion® TacticalC2 application. Operators can view and create information, which is then shared with higher decision-making levels of command.


Loading comments for Airbus is showcasing an array of innovative products for modern defence and security solutions at Eurosatory...