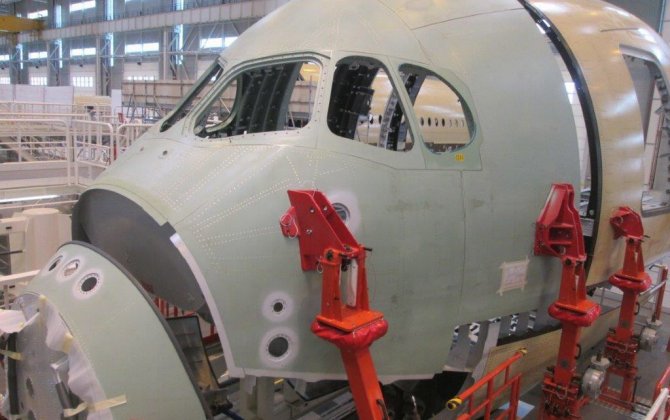 Airbus began fuselage assembly of the largest member of the A350 family at its Hamburg and Saint-Nazaire plants.

Germany-based subcontractor Premium Aerotec handed over the first complete front fuselage section for the first A350-1000 on Sept. 16 and it has now been delivered by air to Hamburg where it will be equipped before being flown to Saint-Nazaire on board one of Airbus’s Beluga fleet of aircraft, which transports outsize loads between the company’s facilities.

The front fuselage section is largely manufactured from carbon fiber composite material (CFRP). Airbus will incorporate the section into the first -1000 test machine (MSN59). This fuselage section will be completed by a CFRP door frame, which Premium Aerotec said will bring significant weight and cost savings compared to a traditional aluminum section.

Delivery of the rear fuselage section from Premium’s Augsburg plant is scheduled for the end of September.

“In addition to higher loads and the use of new structural technologies, the over three-meters longer fuselage section for the -1000 made considerable modifications in the design and construction necessary compared to its sister A350-900 model,” said Daniel Wenninger, program head at Airbus for the front and rear fuselage of the A350-1000. “The team managed to devise a first-class design for this highly complex aircraft component and to deliver it on time and in the desired high quality.”

Assembly of the first A350-1000 wings got underway in August at Airbus in Broughton in the UK and final assembly of the aircraft will begin in Toulouse early 2016, followed by the first flight in the second half 2016. First deliveries are scheduled to start mid-2017.