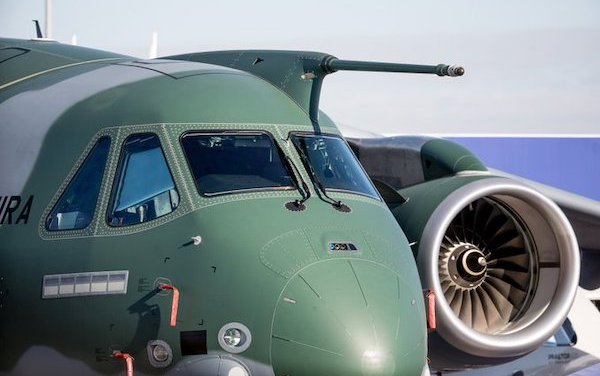 The Embraer C-390 Millennium multi-mission aircraft, manufactured by Embraer, today received the Grand Laureate in the Defense Segment and the Laureate Award for the “Best New Product” in Defense from Aviation Week Network. The citation for the award reads, “The first C-390 tanker/transport, the largest and most sophisticated aircraft yet developed by Embraer, was delivered to the Brazilian Air Force in 2019.”

“To receive an award with as much prestige as the Laureate is a very significant acknowledgement of the exceptional work of all Embraer employees. This is a substantial recognition of the merits of our engineers and the ability of our workforce to execute the development of such an advanced product with excellence,” said Francisco Gomes Neto, Embraer S.A. President and CEO. “Embraer's new business strategy seeks to increase revenue and profitability, and the C-390 Millennium plays an important role in solidifying the Company as a serious entrant in a new market segment.”

“We are honored to receive this award, which recognizes the excellence of our programs and of this aircraft, which was developed to set new standards in its class, bringing exceptional performance complemented by the lowest life-cycle cost in the market,” said Jackson Schneider, President and CEO of Embraer Defense & Security. “The C-390 Millennium offers greater flexibility and value to operators performing air transport and air mobility missions, among others.”

The Aviation Week Laureates Awards recognize the extraordinary achievements and innovative personalities that represent the values and vision of the global aerospace community. Programs honored with Laureates Awards have changed the way people work and move around the world. Aviation Week continues to recognize the very best accomplishments in the four pillars of our industry: Defense, Commercial Aviation, Space, and Business Aviation.

In 2009, the Brazilian Air Force (FAB) contracted Embraer to design, develop, and manufacture the C-390 Millennium aircraft as a replacement for its aging C-130 fleet. Deliveries to FAB started in September 2019. The C-390, which was recently ordered by the Portuguese Government, is a new generation multi-mission transport aircraft that offers unrivaled mobility, fast reconfiguration, high availability, and enhanced flight safety, all on a single, exclusive platform.

The aircraft can perform a variety of missions, such as cargo and troop transport, cargo and paratrooper airdrop, aerial refueling, search and rescue, aerial firefighting, medical evacuation, and humanitarian missions.

The C-390 benefits from a modern fly-by-wire flight control system with integrated technology that lowers the workload of the crew and increases the safety of its operation. Furthermore, the aircraft can refuel other aircraft in flight, with the installation of removable internal fuel tanks. The aircraft can also be refueled in flight, thus providing greater flexibility for longer missions. An advanced self-defense system increases the aircraft’s survival capability in hostile environments.

Equipped with two International Aero Engines V2500 turbofan engines, the latest avionics, a rear ramp, and an advanced cargo handling system, the C-390 is capable of carrying up to 26 metric tons of cargo at a maximum speed of 470 knots (870 km/h), with ability to operate in austere environments, including unpaved or damaged runways. The aircraft can carry troops, pallets, armored wheeled vehicles, and helicopters.