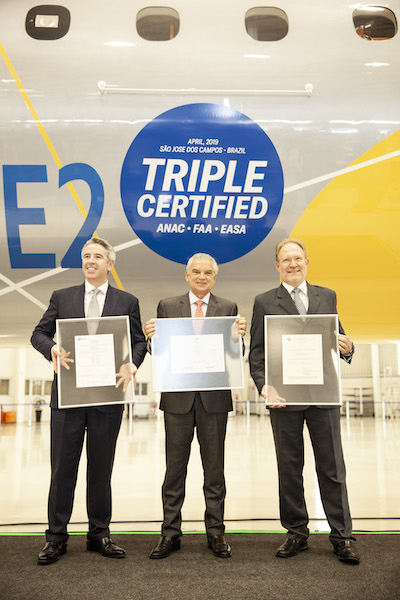 A ceremony to celebrate the Triple E195-E2 Type Certification was held. ANAC, the Brazilian Civil Aviation Agency (Agência Nacional de Aviação Civil); the FAA (U.S. Federal Aviation Administration) and EASA (European Aviation Safety Agency) - The E195-E2 is the biggest of the three members of the E-Jets E2 family of commercial airplanes and the largest commercial aircraft Embraer has ever made.

“Just like the E190-E2, we once again obtained type certification simultaneously from three major world regulatory authorities,” said Paulo Cesar de Souza e Silva, Embraer President & CEO. “This is another great achievement from our engineering and program teams. They’ve built, and now have certification for, the most efficient single-aisle jet on the market. And they’ve done it again right on schedule and exceeding specification.”

“Our flight tests confirmed that the aircraft is better than its original specification. Fuel consumption is 1.4% lower than expected - that’s 25.4% less fuel per seat compared to the current-generation E195. Maintenance costs are 20% lower,” said John Slattery, President & CEO, Embraer Commercial Aviation. “There’s no question that airlines are going to love this airplane’s economics. The E195-E2 is the ideal aircraft for growing regional business and complementing existing low-cost and mainline fleets.”

The E195-E2 will enter service in the second half of 2019 with Azul Linhas Aéreas Brasileiras S.A. Binter Canarias, of Spain, will also receive its first E195-E2 in 2019. Embraer used two prototype aircraft in the E195-E2 certification campaign, one for aerodynamic and performance tests, the other for the interior and validation of maintenance tasks.

Like the E190-E2, the E195-E2 has the longest maintenance intervals in the single-aisle jet category with 10,000 flight hours for basic checks and no calendar limit for typical E-Jet operations. This means an additional 15 days of aircraft utilization over a period of ten years compared to current generation E-Jets.

The E195-E2 features new ultra-high bypass ratio engines, a completely new wing, full fly-by-wire and new landing gear. Compared to the first-generation E195, 75% of aircraft systems are new. The E195-E2 has 3 additional seat rows. The cabin can be configured with 120 seats in two classes, or up to 146 in single class.

Embraer is the world’s leading manufacturer of commercial aircraft up to 150 seats with more than 100 customers from all over the world. For the E-Jets program alone, Embraer has logged more than 1,800 orders and 1,500 deliveries, redefining the traditional concept of regional aircraft by operating across a range of business applications.

E195-E2 performance targets were to be similar to the E195 but with more payload (12 more passengers). The final results, however, show significant improvements in many areas.

Restricted Airports – The E195-E2 can serve more markets from limited airfields. From Denver, the aircraft’s range is more than 900 nm longer than the E195. From Santos Dumont, the gain is more than 500 nm. 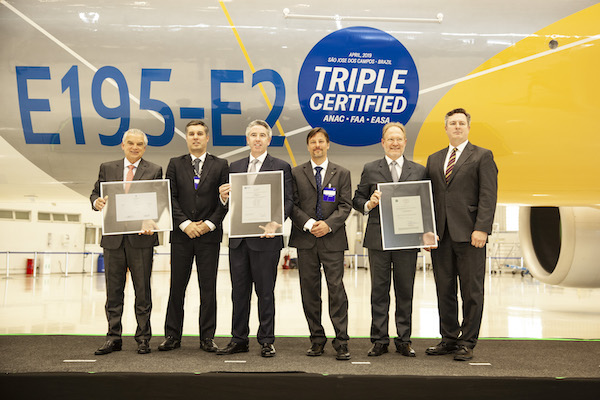 CAE announced that BETA Technologies selected CAE as its partner of choice to design and develop its pilot and maintenance technician training program for the ALIA eVTOL aircraft. CAE will levera...