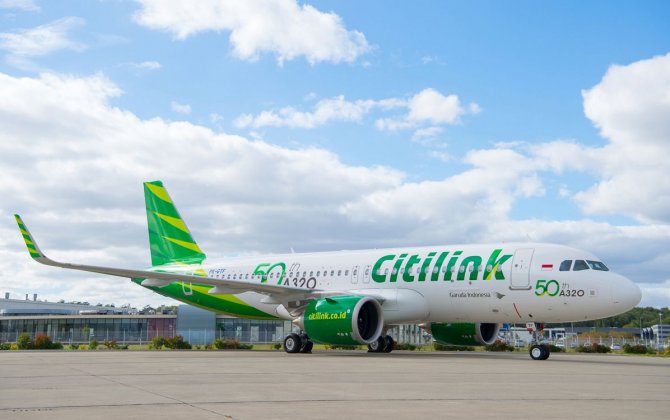 Citilink, the low-cost unit of Garuda Indonesia, has taken delivery of its 50th A320 Family aircraft at Airbus headquarters in Toulouse, France. The aircraft, an A320neo, can seat up to 180 passengers in a single class layout.

The aircraft has been delivered with a special livery to commemorate the milestone, and it joins another 45 A320ceo and four A320neo that are already in service with the airline.

Citilink has selected CFM Leap-1A engines to power its A320neo fleet, and has 30 more of the aircraft on order for future delivery. It is using its growing fleet of Airbus single-aisle aircraft to expand its domestic and regional network.
The A320neo Family incorporates the very latest technologies including new generation engines and Sharklets, which together deliver at least 15 percent fuel savings at delivery and 20 percent by 2020. With more than 5,000 orders received from over 90 customers since its launch in 2010, the A320neo Family has captured some 60 percent share of the market.

Citilink’s newest A320neo has a special livery to mark the delivery of the airline’s 50th A320 Family aircraft.

The recent outbreak of COVID-19 has sent aviation industry into a nosedive. With project revenue losses for airlines in 2020 estimated to be around US$252 billion, for some the future of the industry...