The route demonstration flight of ARJ21 aircraft in southwestern region of China was officially kicked off with ARJ21 light in the route of Kunming-Lijing-Xishuangbanna-Kunming.

The demonstration flight lasted for three days and was carried out in two cross routes and three counter routes among eight airports in Kunming, Lijing, Xishuangbanna, Tengchong, Lincang and Dali. The goal is to display the performance of ARJ21 aircraft in plateau conditions and its compatibility with high-altitude airports and explore the regional aviation express lines in southwestern region of China.

As southwestern region of China is rich in tourism resources, building a route network for air transportation can improve the accessibility of this region and greatly reduce the time cost of tourism in southwestern region of China. According to relevant statistics, the airports in Yunnan have accommodated 532,900 take-offs and landings for transportation in 2018, with a passenger throughput of 67.5856 million person-times, and especially, Kunming airport has ranked 35th in the world in passenger throughput, therefore this region enjoys unique advantages in developing regional aviation.

ARJ21 aircraft is the first type of regional jet designed in accordance with the operating conditions in mid-western & northern regions of China, which has excellent performance in plateau and high temperature conditions and crosswind performance, and especially could meet the requirements of take-off and landing at the airports in southwestern region of China and obstacle clearance along complex routes.

By the end of 2018, there are a total of 36 high-altitude civil aviation airports in China, most of which are in western region of China. According to relevant statistics, the four airports of Kunming, Lanzhou, Lijiang and Xining account for more than 95% of the transport volume of general high-altitude airports in China. As the development of regional aviation in China and the social and economic development in mid-western region of China can promote each other, the increase of air transportation service coverage and the improvement of aviation operating environment can not only facilitate local people's travel, but also promote the high-quality development of regional economy. With the improvement of COMAC's production capacity and the expansion of ARJ21 fleet size, the China-made regional jet will play an important role in the balanced and coordinated development of various regions in China. 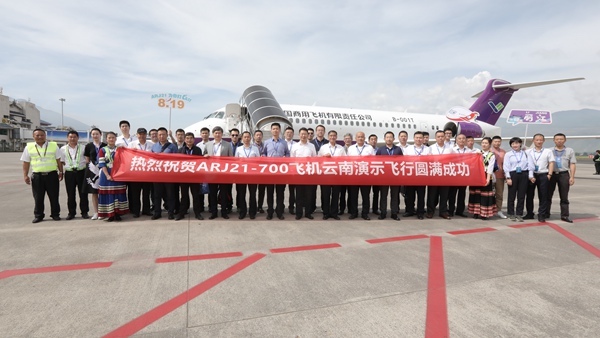 To create conditions for accelerating the market-oriented development of ARJ21 aircraft in mid-western & northern regions of China, COMAC has always adhered to the principles of customer centered and market oriented. Carried out the tasks such as design optimization, batch production and delivery, and operation support in a down-to-earth manner. It has set up a 24/7 rapid response service mechanism to ensure the safe and smooth operation of the aircraft.