“We selected the Dash 8-400 aircraft to support our development of a stronger domestic network and also to support our regional and international networks,” said Rui Carreira, Chairman and Chief Executive Officer, TAAG Angola Airlines. “With our acceptance of our first Dash 8-400 aircraft, we are continuing to implement our restructuring strategy and enhancing our service to smaller communities. The Dash 8-400 aircraft is well known for its comfortable passenger amenities, operational versatility and outstanding economics, which will be critical for TAAG’s operations where large aircraft are not economical. We look forward to its introduction to our fleet and to the diligent, ongoing support of De Havilland Canada’s teams as we build our network.”

“We are delighted to announce that TAAG has taken delivery of its first Dash 8-400 aircraft which was completed through a delegated delivery process,” said Mr. Young. “Amidst the current health restrictions facing many countries and the need for efficient regional aircraft to restart air services, we have developed a remote delivery process to support our customers’ recovery efforts. Regional aircraft are proving to be the most important tools to support market recovery and De Havilland Canada’s teams are standing ready to provide ongoing service solutions to support TAAG’s success.

“The Dash 8-400 aircraft has proven its reliability and flexibility in Africa’s most challenging environments, including the hot and sandy regions in North Africa and the Ethiopian Highlands. The aircraft’s hot and high operational capability, along with its jet-like speed and comfort -- while retaining turboprop economics -- are well suited for Africa and contribute to the aircraft’s diverse customer base. We are confident that the Dash 8-400 aircraft is ideally suited to meet and exceed TAAG’s requirements, and welcome the airline to our family of more than 70 customers and operators – many of whom are currently using the Dash 8-400 aircraft to restart flying and deliver essential goods and transport during the COVID-19 pandemic,” added Mr. Young. 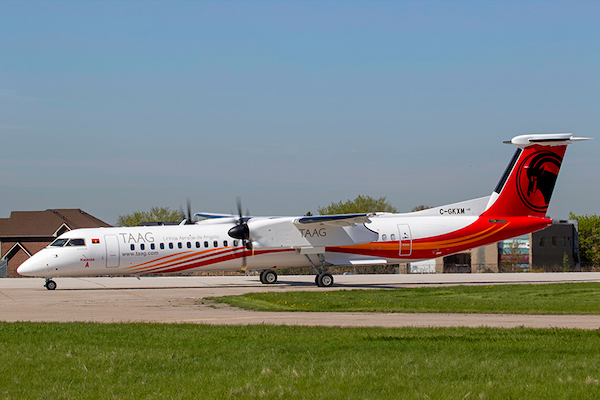