EHang announced membership in the Air Mobility Urban - Large Experimental Demonstration project, one of the largest European demonstrations of Urban Air Mobility.  The AMU-LED project was initiated by the European Union, and the consortium executing the project includes 17 prominent companies and institutions globally, including EHang and industry giants such as Airbus and Boeing.  Throughout 2022, EHang will perform trial operations of the EH216, its flagship two-seat passenger-grade AAV, in three countries: Spain, the United Kingdom and the Netherlands.

The AMU-LED is an H2020 project of the European Union framed in the SESAR (Single European Sky ATM Research) Joint Undertaking, with the ultimate goal of showcasing one of the largest demonstrations of mobility services with air vehicles and the safe integration of different types of drone operations, otherwise known as U-space, in urban environments to realize increasingly sustainable, smart cities by 2022.  Planned for two years with more than 100 flight hours, the AMU-LED will kick off in January 2021 showcasing various use cases for passenger transport in air taxis, cargo transport, delivery of goods and medical equipment, inspection of infrastructures, police surveillance, and emergency services support.

Through the AMU-LED program, EHang will increase its interaction with European regulatory bodies including EASA (European Aviation Safety Agency) and EUROCONTROL.  This cooperative effort should pave the way for the formulation of relevant UAM policies and standards and contribute to the implementation of UAM in Europe. 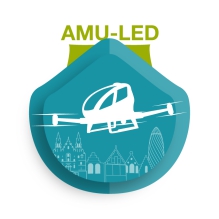 Participation in the AMU-LED project will enable EHang to demonstrate the benefits of its leading AAV products and technology platform solutions.  EHang products enable smart city management, shorten the travel time of both people and goods, and reduce air pollution and traffic accidents.  EHang believes the AMU-LED is a great opportunity to demonstrate the promise of autonomous air taxis and further inspire the global UAM community to develop new product innovations and enabling legal frameworks.

As the world's first publicly-listed UAM company to achieve global commercialization of its passenger-grade AAVs, EHang has been paying attention to the development of the European market.  EHang has achieved multiple milestones in UAM development in Europe.  In 2020, the Company made great regulatory breakthroughs by obtaining flight permits for the EH216 from the civil aviation authorities of Norway and Austria.  So far it has expanded its UAM Pilot City Initiative to three cities in Austria and Spain, and established strategic UAM partnerships with FACC, the leading Austrian aerospace company and Vodafone, the one of the world's biggest telecoms and technology service providers.

As the technological pillar of the Single European Sky initiative, SESAR aims to modernise and harmonise air traffic management in Europe. The SESAR Joint Undertaking (SESAR JU) was established in 2007 as a public-private partnership to support this endeavour. It does so by pooling the knowledge and resources of the entire ATM community in order to define, research, develop and validate innovative technological and operational solutions. The SESAR JU is also responsible for the execution of the European ATM Master Plan which defines the EU priorities for R&D and implementation. Founded by the European Union and Eurocontrol, the SESAR JU has 19 members, who together with their partners and affiliate associations will represent over 100 companies working in Europe and beyond. The SESAR JU also works closely with staff associations, regulators, airport operators, airspace users and the scientific community.

This AMU-LED project has received funding from the SESAR Joint Undertaking under the European Union’s Horizon 2020 research and innovation programme under grant agreement No 101017702.