“The Primary and Secondary Power Distribution System on the Falcon 10X system is a next generation design providing significant weight savings over conventional architecture with equipment reduction,” said Brad Mottier, president of Systems for GE Aviation.

The Primary and Secondary Electrical Power Distribution and Control System for the Falcon 10X will have increased flexibility, enabling Dassault’s rapid implementation for customer-specific configurations. The system architecture will allow ease of in-service modification and implementation, while improving the maintainability of the system.

The system is supported by a suite of configuration tools, providing Dassault the capability to make system changes efficiently, creating more flexibility within the aircraft cabin configuration.

“We are honored to partner with Dassault on this amazing aircraft. We’re building on decades of experience producing electrical power systems on military and commercial applications and are working with Dassault to bring the latest technology to market for their customers,” said Joe Krisciunas, general manager of Electrical Power for GE Aviation.

GE will utilize its Electric Power Integration Center (EPIC) in Cheltenham, UK where it will employ state of the art dynamic software modeling, simulation and analysis to predict how the system and its individual components will perform, including full system testing within a copper-bird environment. GE will perform all electrical power system certification testing within the EPIC, on behalf of Dassault, preparing and delivering the necessary documentation as part of Dassault’s aircraft certification submission to EASA.

“By using this state-of-the-art lab, GE will reduce development risk and program time scales prior to aircraft introduction,” added Krisciunas.

Dassault Aviation’s new Falcon jet will deliver a level of comfort, versatility, and technology unmatched by any purpose-built business jet. Featuring a range of 7,500 nautical miles and a top speed of Mach 0.925, the Falcon 10X will fly nonstop from New York to Shanghai, Los Angeles to Sydney, Hong Kong to New York or Paris to Santiago. The Falcon 10X will enter service at the end of 2025. 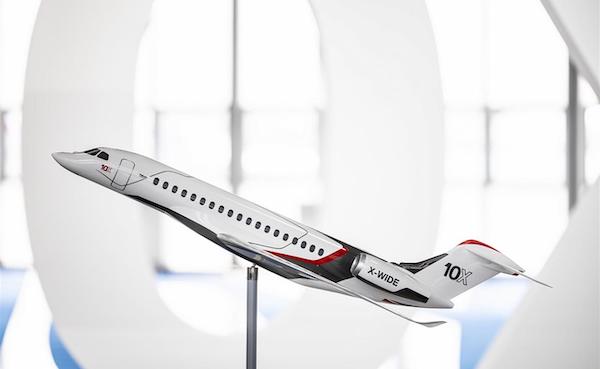