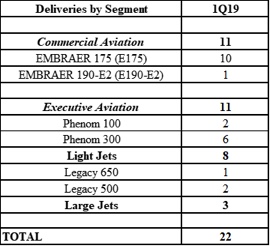 In the first quarter, Embraer delivered the first E175 jet to Mauritania Airlines, the first of this model to the African continent. The airline signed a firm order for two E175 jets in 2018. The contract has a value of USD 93.8 million at current list prices.

Embraer also signed, in April, a firm order for 10 E195-E2 jets with Nigeria's largest airline, Air Peace, which will become the first E-Jets E2 operator in Africa. The contract includes purchase rights for a further 20 E195-E2. With all purchase rights being exercised, the contract has a value of USD 2.12 billion based on current list prices. This order will be included in Embraer's 2Q19 backlog.

The world's best-selling light jet for the seventh consecutive year, the Phenom 300 reached the mark of the 500th aircraft delivered, becoming the only business jet model to reach this milestone in the last 10 years. The aircraft is in operation in more than 30 countries and has accumulated more than 780,000 flight hours. This milestone followed the announcement of the first Phenom 300E and Praetor 600 business jet sales to Brazilian customers.

Embraer Defense & Security and its partner Sierra Nevada Corporation (SNC) announced in February a contract for 12 A-29 Super Tucano light attack aircraft to the Nigerian Air Force. This sale was already included in Embraer's 4Q18 backlog.

In the period, the Brazilian Navy also announced that the Águas Azuis Consortium, formed by thyssenkrupp Marine Systems, Embraer Defense & Security and Atech, was selected for the construction of four defense ships in the Tamandaré Corvettes Class Program (CCT) as preferred bidder. 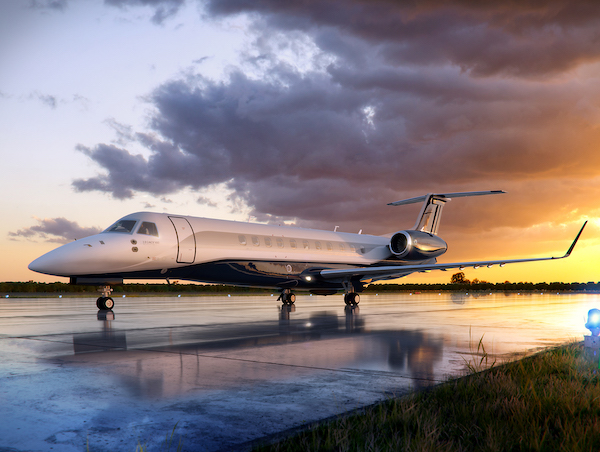