Although deliveries accelerated during the fourth quarter of 2020 relative to the three previous quarters, they were heavily impacted, mostly in commercial aviation, due to COVID-19 pandemic. As of December 31, the firm order backlog totaled USD 14.4 billion. See details below: 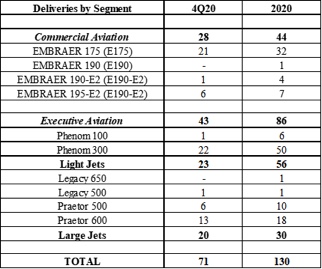 Embraer announced the completion and delivery of the first European conversion of a Legacy 450 to a Praetor 500 for an undisclosed customer. The conversion was performed at the Embraer Executive Jets Service Center at Le Bourget International Airport, in Paris, France.