The largest commercial aircraft by Embraer, the E195-E2 (call sign PR-ZIQ) will be at Wings India 2022 as part of its demonstration tour around India. Showcasing a stunning ‘TechLion’ livery that covers the entire aircraft’s fuselage, this aircraft is the largest member of the new generation E-Jets family, the E-Jets E2, and is designed to seat up to 146 passengers in its signature two by two seating.

“India’s aviation scene is at a turning point and now is the moment for airlines to reposition themselves for sustainable growth,” said Raul Villaron, Asia Pacific Vice-President for Embraer Commercial Aviation. “The E195-E2, offers a low cost per seat, making it very competitive with large narrow-body aircraft that are prevalent in India. It is the perfect aircraft for airlines to tap for the next frontier of growth – connectivity to Tier-II and Tier-III cities.” 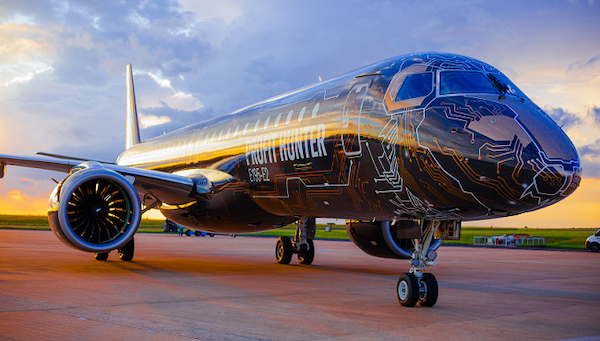 According to Embraer’s analysis, even before COVID, 50% of domestic flights in India had between 90 to 150 passengers per flight. This makes the E195-E2’s combination of ideal capacity and low unit cost a compelling platform to connect metro to non-metro and non-metro to non-metro cities in India.

The E195-E2, part of Embraer’s E2 family of advanced jets, is dubbed the profit hunter because of its high performance and low fuel burn. It delivers the lowest operating costs and highest yields for airlines, more comfort for passengers and space for their bags, smallest noise footprint and less impact on the environment. It is powered by PW1900G GTF™ engines. The E195-E2 is operated by several airlines globally including KLM (The Netherlands), Helvetic Airlines (Switzerland), Azul (Brazil), Air Peace (Nigeria) and soon, Porter Airlines (Canada).