Making its appearance at the first edition of the Selangor Aviation Show is Embraer’s E195-E2, the world’s most efficient and sustainable single-aisle jet. Showcasing a stunning “TechLion” livery that covers the entire aircraft’s fuselage, the E195-E2’s presence at the Selangor Aviation Show comes after the aircraft’s presence at the Dubai Air Show earlier in the month. Featuring Embraer’s two by two passenger seating, the commercial jet sits up to 146 passengers.

“We are thrilled to have Embraer’s participation and sponsorship at our inaugural Selangor Aviation Show, it reflects their vote of support they have for Selangor’s aspirations of being ASEAN’s aviation hub,” said Dato’ Hasan Azhari, Chief Executive Officer, Invest Selangor Berhad. “The E195-E2 on display shows how a regional jet equipped with the latest technologies and the lowest fuel and noise emissions can bring a new dimension to domestic and regional travel.”

“With its new design and technology, the E195-E2 is the world’s most efficient single-aisle aircraft. This jet-powered aircraft emits 25% less emissions per seat than a typical turboprop and has the lowest levels of external noise and emissions among all jet aircraft.” said Arjan Meijer, President & CEO of Embraer Commercial Aviation.

Embraer foresees demand of 60 new commercial aircraft under 150 seats in Malaysia over next 10 years.

In its 2021 market outlook, Embraer foresees a demand of 60 new commercial aircraft under 150 seats in Malaysia over the next 10 years. Driving this demand is the opportunity for aircraft under 150 seats to complement larger aircraft prevalent in the country and enhance the viability of establishing new routes or increasing the frequency of existing routes. This includes the boosting of direct connectivity within Peninsula Malaysia, as well as connectivity between cities in Peninsula Malaysia to East Malaysia (Sabah and Sarawak).

“We see potential for domestic and regional connectivity to multiply in Malaysia. It’s a win-win for all, domestic tourism thrives and passengers get to travel to new destinations with the comfort of a modern commercial jet,” said Meijer. “Airlines can deploy these regional jets with the assurance of its low operating costs and superior aircraft performance, coupled with its green credentials. Incorporating the E-Jets E2’s new technologies and enhanced operations is a key step on the path to a more sustainable aviation industry.”

With a range of 2600nm (~5.5 hours of flight time), the E195-E2 is the largest of the three aircraft in the E-Jets E2 family. It entered into service at the end of 2019 following type certification from three major world regulatory authorities – the FAA (U.S. Federal Aviation Administration), EASA (European Aviation Safety Agency) and ANAC (the Brazilian Civil Aviation Agency). It is currently operated by KLM, which has 53 Embraer E-Jets in its fleet, Azul which operates 55 E-Jets and flies to more than 100 destinations in Brazil, as well as airlines in Switzerland, Spain, Belarus and Nigeria.

Embraer is the world’s leading manufacturer of commercial jets that seat up to 150 passengers. The commercial aircraft manufactured by Embraer are being operated by airlines in more than 130 airlines across over 70 countries, including airlines in the US (all the major carriers), British Airways, KLM, Japan Airlines and airlines in China. 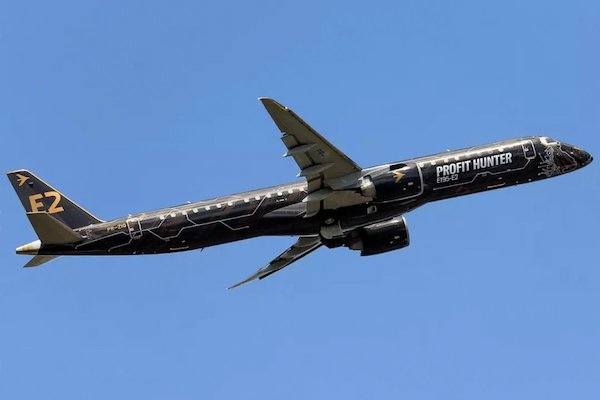