Embraer and Air Astana, a flag carrier of Kazakhstan, have reached a multiyear agreement on a Flight Hour Pool Program to support the component needs for the airline’s new E2 fleet, Embraer’s second generation of the E-Jets family of commercial aircraft.

The E2’s entry into service marks the beginning of Air Astana's fleet renewal. Currently the airline operates a fleet of nine E190s aircraft, the first of which was delivered in 2011, when the airline joined Embraer Pool Program. Now, with the extension of the pool program for the new E190-E2s,

Air Astana have extended their trust in our strong partnership. Air Astana took delivery of its first E190-E2 jet in December 2018 and flies the new aircraft on domestic and Commonwealth of Independent States (CIS) routes. The airline will receive four additional E190-E2s in 2019, with the last of the five aircraft, all of which are leased by AerCap, being delivered in the final quarter of 2019.

The Pool Agreement for the airline’s E190-E2 fleet will cover unlimited access and full repair coverage for more than 325 components with almost a third of them exclusively placed at airline’s main base to ensure high fleet availability. “We are proud that Air Astana has chosen to place its trust in us to support its new E2 fleet, further reinforcing Embraer's commitment to customers in the region with TechCare portfolio of solutions. It is a strong endorsement for the program and Embraer services, proving customers loyalty to the state of the art support of the OEM (Original Equipment Manufacturer) with a competitive value,” said Johann Bordais, President and CEO of Embraer Services & Support.

“The support of the OEM is a natural fit for Air Astana as we transition into our new fleet of Embraer’s second generation of E-Jets. This was fundamental in our decision to join the program, which will allow us to upkeep our daily operations as it offers cost effective and practical solutions, guaranteeing efficiency and competitive results,” said Peter Foster, CEO of Air Astana. Embraer’s Flight Hour Pool Program, which currently supports more than 40 airlines worldwide, is designed to allow airlines to minimize their upfront investment on expensive repairable inventories and resources and to take advantage of Embraer’s technical expertise and its vast component repair service provider network. The results are significant savings on repair and inventory carrying costs, reduction in required warehousing space, and the elimination of resources required for repair management, while ultimately providing guaranteed performance levels.

The E190-E2 is the first of three new aircraft types that will make up the Embraer E2 family of aircraft developed to succeed the first-generation of E-Jets. Embraer Services & Support has implemented the E2 Pool Program to support operators from the very first day of delivery. Widerøe, the largest regional airline in Scandinavia and launch customer for the E190-E2, received its first E2 aircraft on April 2018. Currently, 100% of the delivered E2 E-Jets are supported by the program. This Pool Program is part of a suite of services that Embraer offers to support the worldwide growing fleet of Embraer aircraft through TechCare, the new Embraer platform that assembles the entire portfolio of products and solutions to deliver the best experience of services and support. 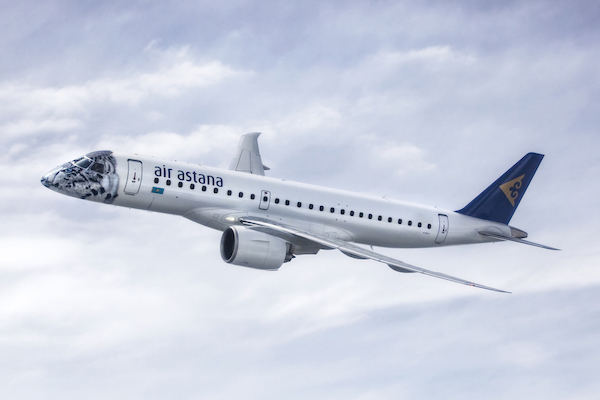