Dassault Aviation’s all-new Falcon 5X has made its first flight, allowing the ultra wide body twinjet to embark on a limited number of preliminary flight tests before the commencement of the full fledged flight test campaign, scheduled to begin next year.

The aircraft took off from Dassault’s Bordeaux-Mérignac final assembly facility with test pilots Philippe Deleume and Philippe Rebourg at the controls.

The two-hour flight was performed with a preliminary version of the Safran Silvercrest engines, because design issues have delayed the power plant development four years beyond the initial timetable.

This advanced flight test campaign will permit to collect a certain amount of airframe and systems data that could not be generated during a ground test campaign undertaken earlier this spring. The ground campaign included ground runs as well as low and high speed taxi tests.

The purpose of the present flight test campaign, which will last only a few weeks, is to help streamline the development process. Flight validation and certification tests will be performed next year, once Safran delivers certifiable engines meeting Dassault’s specifications. 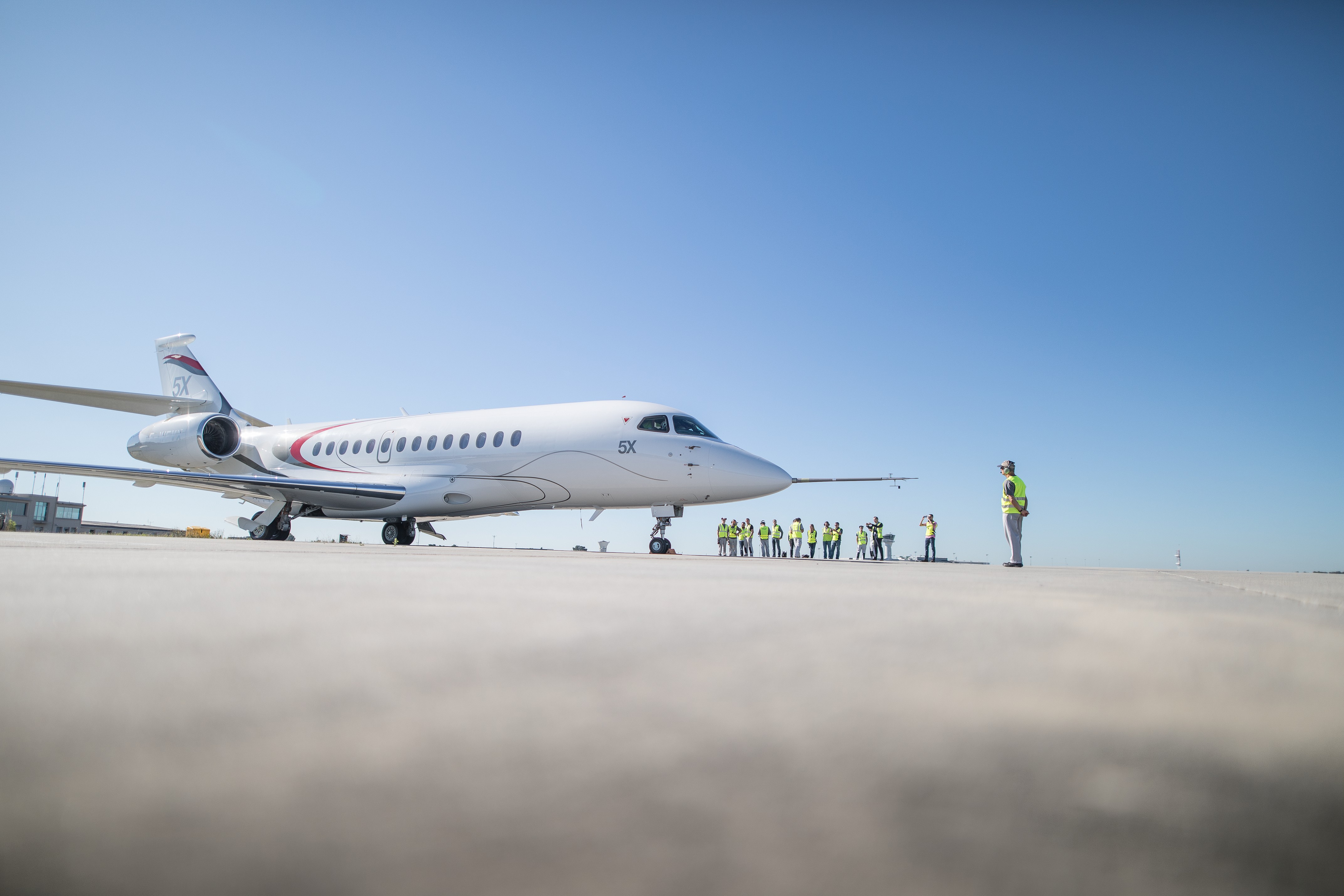 “We’re committed to limiting the consequences of the four year engine development delay as much as possible and the short preliminary flight test campaign is part of this effort,” said Eric Trappier, Dassault Aviation Chairman & CEO. “We will closely monitor the validation tests on the modified Silvercrest, which are scheduled by Safran in the few coming months, as their results will be critical for meeting the 5X entry into service in 2020.
“Our customers are anxious to fly our new wide body Falcon,” continued Trappier. “Combined with the 5X’s new generation digital flight controls, the new ultra efficient wing will make it possible to blend the spaciousness and comfort of large cabin jets with the maneuverability, efficiency and airport capability of much smaller aircraft, establishing a new benchmark for the long range business jet market.”

The cabin of the Falcon 5X will be the tallest and widest in the industry. Yet the aircraft will land at a speed down in the turboprop range and have a fuel burn significantly lower than that of any other business jet in its class.

Precise Flight has expanded its Supplemental Type Certificat from the FAA for the Pulselite® Bird Strike Prevention System to include approvals for the Bell 429 and Bell 505 variations.&...

We are keeping you informed regarding new measures commercial airlines are introducing in order to ensure maximum sanitary protection for passengers and crew. What is happening in business a...

The Annual General Meeting of Shareholders of Safran met behind closed doors at the Company's head office, under the chairmanship of Ross McInnes, Chairman of the Board of Directors. The...

TECNAM announced the introduction of a new player into the General Aviation arena. With the Type Certificate expected by July, the P2010 TDI has been one of the most secret development programs ever!&...