The first Bombardier customer aircraft to fly away on sustainable aviation fuel is delivered! Latitude 33 Aviation will manage and charter the best-selling Challenger 350 business jet in Seattle, WA, on behalf of the aircraft owner. “We are very pleased that the customer and Latitude 33 Aviation joined us in demonstrating that SAF can become a mainstream, drop-in alternative to traditional jet fuel for general aviation aircraft,” said Peter Likoray, Senior Vice President, Worldwide Sales and Marketing, Bombardier Business Aircraft. “We are actively promoting the use of SAF as a regular part of flying business aircraft and Latitude 33 Aviation’s trust as the first customer to fly away from our delivery center on these fuels represents a turning point in the longstanding and industry-wide pledge to reduce CO2 emissions.”

Following the first shipment of SAF in Canadian history, the inaugural Bombardier customer aircraft to fly on SAF is the award-winning Challenger 350 business jet, which continues to lead the way in the super mid-size segment. In addition to reaching 300 deliveries faster than any other jet in the medium and large categories, the Challenger 350 aircraft recently demonstrated its undeniable performance capabilities and superior reliability by setting speed records for 10 key American city pairings in 20.5 hours. The Challenger 350 aircraft is one of the most efficient business aircraft in the world. Its redesigned canted winglets cut down on drag, reducing fuel burn and its engines deliver increased thrust, contributing to the aircraft’s fuel efficiency and significantly lower emissions. 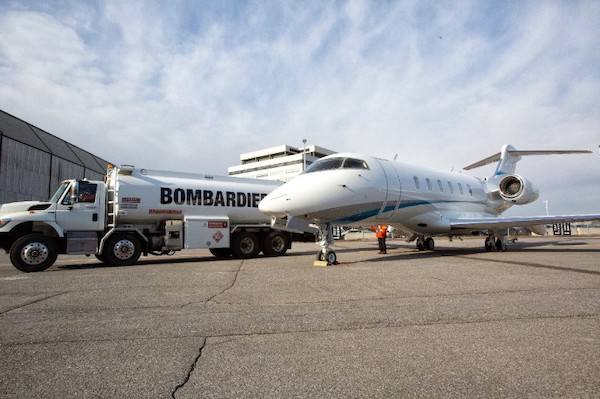 With half a dozen Challenger series aircraft in service, Latitude 33 Aviation manages one of the newest and largest fleets of light, mid-size, and super mid-size aircraft in North America. The aircraft charter company’s commitment to sustainable flying marks a significant milestone in the increased use of SAF throughout the industry, which follows Bombardier’s inaugural shipment of SAF, a key pillar in the company’s plan to secure long-term partnerships with fuel suppliers to deploy SAF worldwide.

“We’re excited about our continued relationship with Bombardier,” said Solomon Short, Director of Operations at Latitude 33 Aviation. “Our company is known for its exceptional service and seamless travel experience, so this factory-new delivery will help us continue to provide one of the best charter flight experiences, as well as help address the industry’s environmental impact.”

Committed to providing the best to its customers, Bombardier announced a series of enhancements to the Challenger 350 aircraft this year, including compact Head-up Display (HUD) and Enhanced Vision System (EVS), class-leading cabin sound-proofing technology, and refined cockpit aesthetics. A performance improvement package also allows the aircraft to fly up to 1,500 NM farther out of short runways, complementing its steep approach certifications awarded by international regulatory bodies including EASA, FAA, and TC. With this suite of enhancements, the Challenger 350 aircraft continues to take center stage in the super mid-size segment and to be the preferred choice for Latitude 33 Aviation’s luxury travel experiences, such as the West Coast Safari.