Delta Air Lines took delivery of its first A330-900, one of 35 A330neos the Atlanta, Georgia-based airline has on order. With new fuel-efficient engines, aerodynamic improvements and the advanced Airspace by Airbus cabin, the A330-900 will give Delta a premier long-haul, wide-body aircraft with exceptionally low operating costs.

Delta is one of the world’s leading airlines, an industry pacesetter. As the A330-900 is placed into service on Delta's global network, it will complement the airline's growing wide-body fleet of A330s and A350 XWBs, setting new standards for efficiency, profitability, and provide passengers with extraordinary travel experiences.

An environmental milestone was set as a Delta crew ferried the new A330-900 back to the company’s Atlanta base using a jet fuel blended from conventional sources and non-petroleum synthetic fuel.

Delta will initially base its A330-900s at Seattle-Tacoma International Airport, where it will operate the aircraft on flights to Shanghai, Seoul and Tokyo Narita. Delta will configure its A330-900s for 281 passengers, including 29 in business-class suites, 28 in premium economy, 56 in extra-legroom economy seats, and 168 in standard economy. The aircraft will feature Delta's new internally developed in-flight entertainment system.

The A330neo is a true new-generation aircraft, building on the features of the popular A330 features and leveraging technology developed for the A350 XWB technology.

Powered by the latest Rolls-Royce Trent 7000 engines, and featuring a new wing with increased span and A350 XWB-inspired Sharklets, the A330neo provides an unprecedented level of efficiency – with 25% lower fuel burn per seat than previous generation competitors.

Equipped with the Airbus Airspace cabin, the A330neo offers a unique passenger experience with more personal space and the latest generation in-flight entertainment system and connectivity.

The A330-900 can accommodate 287 seats in a typical three-class layout or up to 440 for high-density configurations with a range of up to 7,200 nautical miles. 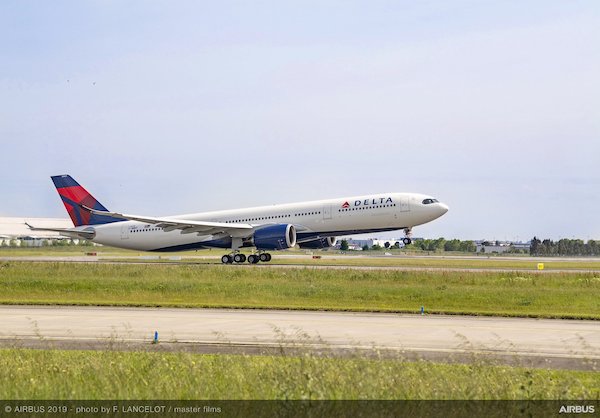 Developing the decarbonized aircraft of the future is a priority shared throughout the aviation industry. Among the solutions being considered, Liebherr-Aerospace Toulouse is working on systems and eq...