Irkut Corporation presents for the first time at the foreign exhibition the new generation MC-21-300 passenger aircraft. The airliner arrived at festival of aviation, space and technology TEKNOFEST 2019, which will be held in Istanbul (Turkey) from 17 to 22 September 2019.

During the flight from Zhukovsky airfield (Moscow region) to Ataturk airport in Istanbul, the MC-21-300 aircraft covered more than 2400 km in 3.5 hours.

The aircraft was piloted by a crew of test pilots Vasily Sevastyanov and Oleg Mutovin.

After landing, Vasily Sevastyanov said: "The flight was in normal mode. The aircraft and its systems performed well in flight. For the first time, part of our route passed over the sea".


MC-21-300 aircraft, presented at the exhibition in Istanbul, is equipped with a two-class passenger cabin. It will take part in the flight program and will be open for visits by specialists and potential customers.

Ravil Hakimov, general director of Irkut Corporation,  said: "During the exhibition, we plan to hold a presentation of the aircraft and demonstrate its competitive advantages to potential customers".

The MC-21-300 aircraft debuted in Russia in August this year at the MAKS-2019 International Aviation and Space Show. 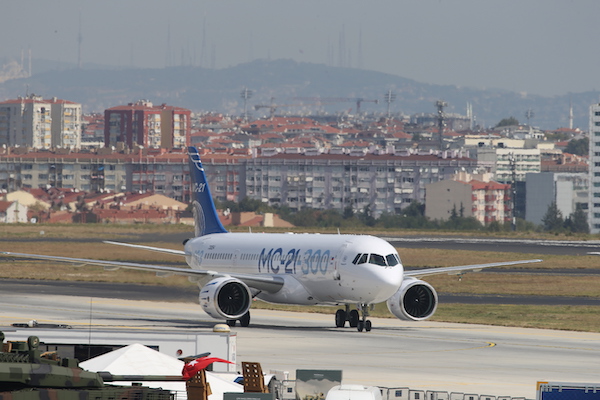