Air France has received its first A220-300 from an order for 60 aircraft of the type, the largest A220 order from a European carrier. The aircraft was delivered from Airbus’ final assembly line in Mirabel, Quebec, Canada and officially unveiled to the public during a ceremony held at Paris Charles-De-Gaulle Airport.

The A220 is the most efficient and flexible aircraft in the 100 to 150 seat market segment today. The renewal of the Air France single-aisle fleet with this latest generation aircraft will increase efficiency along with customer comfort and support Air France to meet its environmental goals and sustainability objectives.

The first Air France A220-300 will be operated on its medium-haul network from the 2021 winter season. Currently, Air France operates a fleet of 136 Airbus aircraft. Air France is also renewing its long-haul fleet, and has already taken delivery of 11 A350s out of an order of 38.

The Air France A220-300 cabin is configured in a single-class layout to comfortably welcome 148 passengers. Offering superior single-aisle comfort, with the widest leather seats, largest windows and up to 20% more overhead stowage space per passenger, the Air France A220 also features full WiFi connectivity throughout the cabin and two USB sockets at each passenger seat. 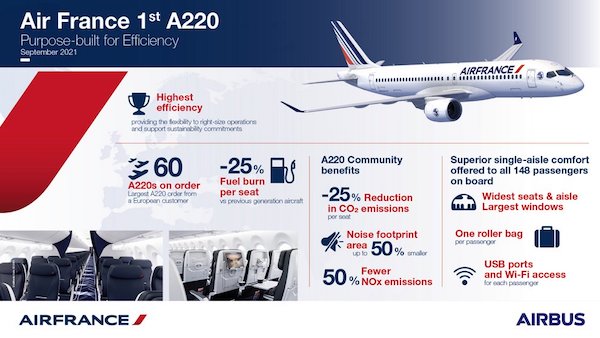 The A220 is the only aircraft purpose-built for the 100-150 seat market and brings together state-of-the-art aerodynamics, advanced materials and Pratt & Whitney’s latest-generation geared turbofan engines. With a range of up to 3,450 nm (6,390 km), the A220 gives airlines added operational flexibility. The A220 delivers up to 25% lower fuel burn and CO2 emissions per seat compared to previous generation aircraft, and 50% lower NOx emissions than industry standards. In addition, the aircraft noise footprint is reduced by 50% compared to previous generation aircraft - making the A220 a good neighbour around airports.

Air France and Pratt & Whitney have a long history that dates to the Douglas DC-3 with Wasp engines in the 1940s and the Boeing 707 with JT3D engines in the 1960s. Today the airline operates several aircraft equipped with auxiliary power units (APUs) from Pratt & Whitney, including the Airbus A320ceo family, Boeing 787 Dreamliner, and Embraer E-Jets.

“We’d like to welcome Air France back to the Pratt & Whitney engine family with their new GTF-powered aircraft,” said Rick Deurloo, chief commercial officer at Pratt & Whitney. “Pratt & Whitney has powered the growth of Air France in different capacities for the past 75 years, and we can’t wait to help Air France write the next successful chapter in quieter, more sustainable aviation.”

To date GTF engines have saved European operators nearly half a billion liters of fuel and more than a million metric tonnes of carbon emissions. In Europe alone, GTF-powered aircraft have carried more than 70 million passengers over more than 570,000 flights. 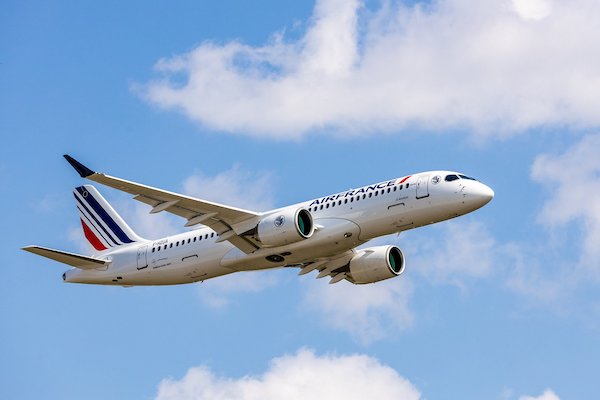