Popular Science recognized Garmin Autoland with a 2020 Best of What’s New Award in the Aerospace category. Autoland is part of the Garmin Autonomi family of autonomous safety-enhancing technologies for aircraft. The world’s first system of its kind for general aviation aircraft, Autoland has the ability to land an aircraft in an emergency should the pilot suddenly become incapacitated or unable to fly1.

“We are truly humbled and proud to be selected by Popular Science with this honor for our revolutionary Autoland autonomous flight technology,” said Phil Straub, Garmin executive vice president and managing director, aviation. “This recognition highlights our commitment to innovate in the aviation industry. It’s a testament to the entire Garmin team, whose dedication to continuously drive our pioneering vision led to the development of the world’s first Autoland system for general aviation aircraft and changed the way we look at aviation safety.” 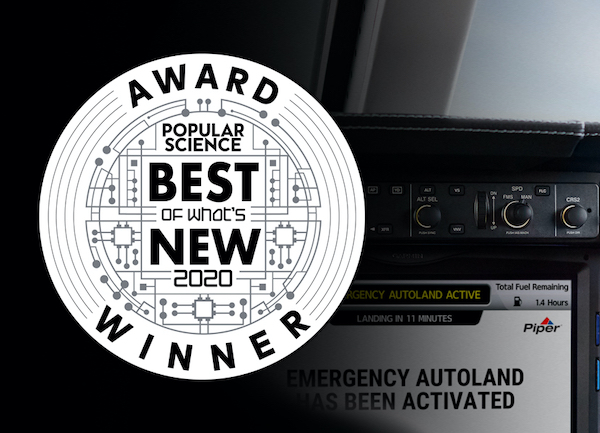 For 33 years, the editors at Popular Science have reviewed thousands of products in search of the top 100 tech innovations each year – breakthrough products and technologies that represent significant advancements in their categories. The publication’s Best of What’s New Awards are presented to 100 new products and technologies in 10 categories: Aerospace, Automotive, Engineering, Entertainment, Gadgets, Health, Home, Personal Care, Security, and Sports & Outdoors. Garmin Autoland was chosen among nine other innovations in the Aerospace category, which includes anything that flies or pertains to flight.

“The Best of What’s New Awards showcase the year’s greatest feats of human ingenuity,” said Popular Science Editor-in-Chief Corinne Iozzio. “Even in a year like 2020, innovation has helped us glimpse a future that’s safer, smarter, and more enjoyable than we might have thought possible.”

Garmin Autoland is available as part of the G3000® integrated flight deck on select general aviation aircraft. In the event of an emergency, such as pilot incapacitation, Autoland is capable of completely taking control of the aircraft, avoiding weather and terrain, and landing at the nearest, most suitable airport. Elements taken into consideration when identifying the most suitable airport include a wide range of performance, operational and environmental factors. Throughout an Autoland activation, the system provides simple visual and verbal communications in plain-language so passengers in the aircraft know what to expect. Further, the system will automatically communicate with air traffic control (ATC), advising controllers and pilots operating near the aircraft of its location and its intentions.

On approach to land, the system initiates a controlled descent to the airport. Once in landing configuration, the aircraft begins its descent to the runway. On the runway, automatic braking is applied while tracking the runway centerline to bring the aircraft to a full stop. Engine shutdown is also automated so occupants can safely exit the aircraft.


Loading comments for Garmin Autoland honored as one of 2020 greatest innovations by Popular Science...