Joby Aviation announced that its full-size pre-production aircraft has successfully demonstrated its revolutionary low noise profile, following acoustic testing completed with NASA. Following analysis of the data obtained over two weeks of testing as part of NASA’s Advanced Air Mobility National Campaign, Joby’s aircraft was shown to have met the revolutionary low noise targets the Company set for itself.

The aircraft registered the equivalent of 45.2 A-weighted decibels (dBA) from an altitude of 1640 feet (500 meters) at 100 knots airspeed, a sound level which Joby believes will barely be perceptible against the ambient environment of cities.

NASA engineers also measured the aircraft’s acoustic profile during planned take-off and landing profiles to be below 65 dBA, a noise level comparable to normal conversation, at a distance of 330 feet (100 meters) from the flight path.

JoeBen Bevirt, Founder and CEO of Joby, commented: “We’re thrilled to show the world just how quiet our aircraft is by working with NASA to take these measurements. With an aircraft this quiet, we have the opportunity to completely rethink how we live and travel today, helping to make flight an everyday reality in and around cities. It’s a game-changer.”

All measurements were conducted using NASA’s Mobile Acoustics Facility, with more than 50 pressure ground-plate microphones placed in a grid array at Joby’s Electric Flight Base near Big Sur, CA.

To measure the Joby aircraft’s acoustic footprint during overhead flight, it flew over the grid array six times at an airspeed of 100 knots and a low altitude to measure as much of the aircraft’s noise above the background ambience as possible. Data recorded from the field of omni-directional microphones was then processed by NASA into an “acoustic hemisphere,” representing the sound emission in all directions below the aircraft at a 100 ft radius. Joby then applied standard processing techniques for spherical spreading and atmospheric attenuation, resulting in an average free-field overhead flight acoustic reading of 45.2 dBA at 1640 feet (500 meters).

Joby also conducted more than 20 take-off and landing tests above the grid array, using a variety of acceleration rates and climb angles to allow NASA to capture acoustics representative of likely operational procedures. This data will be used to adjust flight software and take-off and landing procedures for further low-noise optimization.

From day one, the Joby aircraft was designed with acoustics in mind, with the number of propellers and blades, blade shape and radius, tip speeds, and disk loading of the aircraft all selected to minimize its acoustics footprint and improve the character of the sound produced. Each of the six propellers can also individually adjust its tilt, rotational speed, and blade pitch to avoid blade-vortex interactions that contribute to the acoustic footprint of traditional helicopters.

More details regarding procedures and measurements will be released by both Joby and NASA in technical papers to be presented at industry conferences this summer.

Joby’s piloted five-seat eVTOL aircraft can carry four passengers at speeds of up to 200 mph, with a maximum range of 150 miles on a single charge and zero operating emissions. With more than 10 years of development and over a thousand flight tests completed, Joby is targeting the launch of its aerial ridesharing service in 2024. 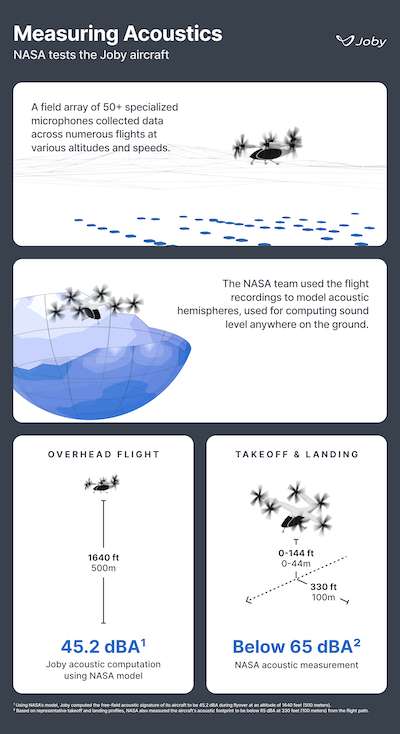