KC-30 uses its boom on operations for the first time 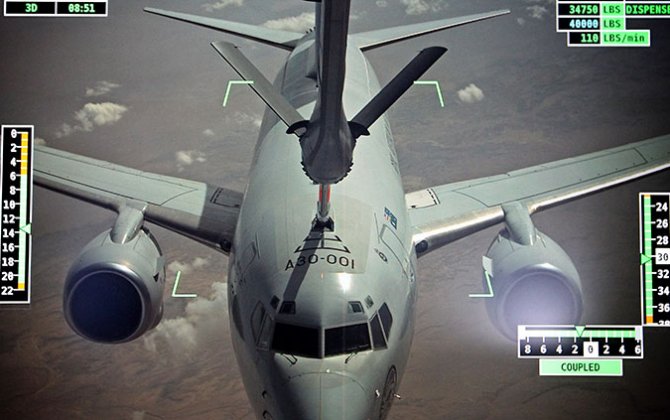 A RAAF KC-30A tanker transport has refuelled a RAAF E-7A Wedgetail AEW&C aircraft on operations for the first time.

The mission over Iraq in support of Coalition operations against Islamic State last week saw the KC-30 use its ARBS (Aerial Refuelling Boom System) to refuel the Wedgetail in the first time a RAAF KC-30 had used its boom on operations.

“Being able to use the KC-30A boom on operations to refuel an aircraft such as the Wedgetail is a force multiplier for Australian air power and Coalition air operations,” Commander of the Australian Air Task Group, Air Commodore Stuart Bellingham, said in a statement.

“Proving this mode of air-to-air refuelling adds to the list of aircraft types that our KC-30A can now support, contributing to another in-demand capability of the coalition air campaign.”

The 17m long ARBS is capable of offloading fuel at a rate of 4,500 litres per minute.

“During this mission we transferred 34,750lb of fuel in about 15 minutes – the equivalent of refuelling 300 family sedans at a rate of less than three seconds per car,” the KC-30’s unnamed air refuelling operator said in the statement.

“We look forward to this becoming a normal part of our operations to assist the Wedgetail’s vital mission of providing airborne early warning, command and control above Iraq and Syria.”

The ARBS boom had a troubled early life – during flight testing a KC-30 bound for the RAAF lost its boom in an incident while refuelling a Portuguese F-16 in January 2011.

But the then Defence Materiel Organisation (DMO) announced in March this year that the KC-30 project – AIR 5402 – had been removed from its Projects of Concern list, after an extensive development and testing program resolved issues with the ARBS. Loading comments for KC-30 uses its boom on operations for the first time...