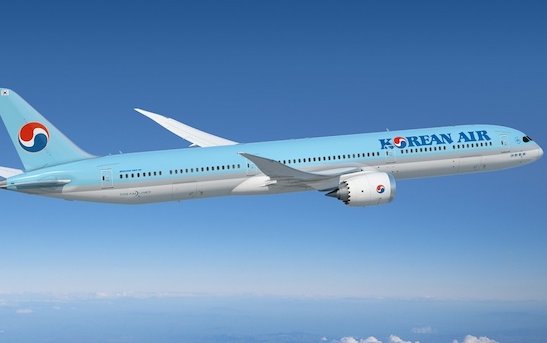 Korean Air has finalized an agreement with Boeing to order 20 787 Dreamliner airplanes – including 10 each of the 787-10 and 787-9 models – valued at $6.3 billion according to list prices. Along with an agreement to lease 10 additional 787-10 jets from Air Lease Corporation, the carrier will quadruple its Dreamliner fleet as it looks to bring greater efficiency and passenger comforts to its operations.

Korean Air, one of the largest transpacific carriers in Asia with 16 non-stop routes to North America, is adding the 787-10 to its long-haul fleet to complement its existing 787-9 and 777 airplanes.

The 787-10 is the largest member of the super-efficient Dreamliner family. At 224 feet long (68 meters), the 787-10 can serve up to 330 passengers in a standard two-class configuration, about 40 more than the 787-9. Powered by a suite of new technologies and a revolutionary design, the 787-10 offers carriers the lowest operating cost per seat of any twin-aisle jet in service.

“As we continue to innovate our product offering, the 787 Dreamliner family will become the backbone of our mid-and long-haul fleet for many years to come,” said Walter Cho, Chairman of Korean Air. “In addition to 25 percent improved fuel efficiency, the stretched 787-10 offers around 15 percent more space for passengers and cargo than our 787-9s, which will be critical to our long-term business goals.”

Korean Air announced its commitment to order the 20 Dreamliner jets and lease 10 more at the Paris Air Show in June. The airline plans to deploy the 787-10 on medium-range routes, while continuing to leverage the longer-range capabilities of the 787-9 Dreamliner on long-haul flights.

“As Korean Air celebrates a half-century of excellence in flight, they have earned the respect and admiration of the global aviation community. We are honored to partner with them again as they build out a world-class fleet of airplanes for their next 50 years,” said Ihssane Mounir, Boeing senior vice president of Commercial Sales and Marketing. “With the 747-8, 777 and now the 787 Dreamliner family, Korean Air operates one of the most efficient and comprehensive widebody fleets in the world.”

Korean Air’s Aerospace Division is a key Boeing partner on the 747-8 and 787 programs, supplying the distinctive raked wing-tips for each model. The division is also a supplier of the Advanced Technology (AT) Winglet on the 737 MAX.

Rolls-Royce has officially unveiled the Pearl 10X, the third and most powerful member of its market-leading Pearl engine family for the business aviation market. The engine has been optimised to...