Leonardo boosts helicopter leadership in China with orders for 15 AW139s 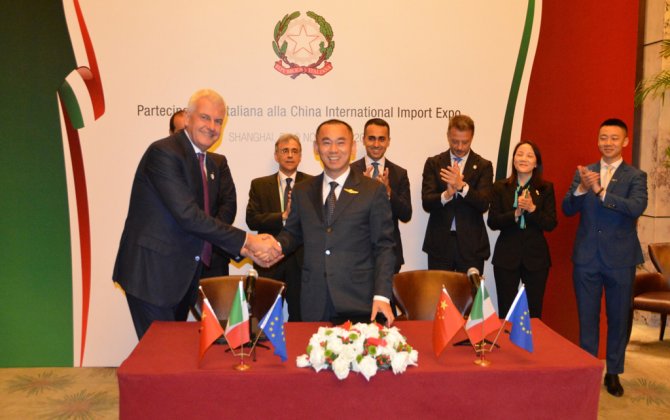 Leonardo announced today that Sino-US Intercontinental Helicopter Investment (Sino-US) of China has signed contracts for 15 AW139 intermediate twin engine helicopters. The announcement was made during the China International Import Expo in Shanghai in the presence of the Italian Deputy Prime Minister and Minister of Economic Development, Labour and Social Policies Luigi Di Maio. The aircraft, which will be delivered between 2019 and 2021, will be used by Kingwing General Aviation (Kingwing) to perform EMS (Emergency Medical Service) missions in China. These latest orders, strengthening the collaboration between Leonardo and Sino-USin China, build on existing contracts for EMS helicopters signed by Sino-US in recent years which include 34 AW119Kx single engines, 24 AW139s and 25 AW109 Trekkers.

Leonardo and Sino-US also announced the signing of a Heads of Agreement (HoA) to further expand their long term relationship. Under the HoA, Sino-US is confirmed as the exclusive distributor of Leonardo helicopters in the Chinese civil and commercial helicopter market, with a purchase and delivery plan for 160 aircraft, including various types in the 2019-2023. The HoA also foresees the establishment of a Leonardo Authorised Training Academy in China in partnership with Sino-US, and the setup of a Completion and Customization Centre managed by Sino-US with the capability to configure, customise and complete the helicopters delivered by Leonardo in-country. Leonardo and Sino-US started their successful collaboration in 2013 and their partnership is now entering in a new phase of increased collaboration to ensure the continued support of the growing fleet in the country.

Alessandro Profumo, Leonardo CEO, said: “With the new orders and Heads of Agreement signed today, Leonardo reinforces its leading position in China, a fast-growing and highly competitive market where our state-of-the-art helicopters are performing challenging emergency medical support operations every day, serving communities around the nation. We’re extremely pleased with our strong partnership with Sino-US. This latest agreement provides further evidence of Leonardo’s commitment to expand its range of customer services available close to operators around the world, as its fleet and customer base grow stronger, in support of the framework of  Leonardo’s Industrial Plan.”

Jianming ZOU, President of Shanghai Kingwing General Aviation Co., Ltd., said “Leonardo is supplying a world class type in the AW139. It has been a great partner in supporting the expansion of our company and investing in China, a fast-growing market.””

Over 185 Leonardo helicopters, of various types, have now been sold to Chinese customers for a range of both commercial and public services. This includes the Company maintaining its leading position in the EMS market with a 70% market share.

With further deliveries planned over the next few years, Chinese civil operator Kingwing will become one of the largest operators of Leonardo helicopters worldwide.

Loading comments for Leonardo boosts helicopter leadership in China with orders for 15 AW139s ...

Daher announced business results of 2019 for its expanded turboprop-powered aircraft family, with the company logging sales of 48 TBMs in the TBM 910 and TBM 940 versions, along with 20...

Sheremetyevo International Airport's new passenger terminal - built and equipped in compliance with the highest global standards - was opened to the public. The official opening ceremony was atten...