March 17, 2020 the fourth MC-21-300 flight-test aircraft made a non-stop flight from Irkutsk to the Ramenskoye airfield (Zhukovsky, Moscow region) to continue flight tests.

The plane was piloted by a crew of Heroes of Russia, Honored test-pilot Roman Taskaev and 1st class test-pilot Oleg Mutovin. According to Roman Taskaev, the flight was in normal mode.

Specialists of the Irkutsk Aviation Plant, a branch of Irkut Corporation (part of the UAC), installed a passenger cabin in a high-density configuration on the plane.

One-class layout is designed for 211 seats. This is the most dense version of the layout of MC-21-300 aircraft. Airliners with such a cabin are designed primarily for low-cost airlines.
Currently, the aircraft is equipped with 172 passenger seats, and control and measuring equipment and workplaces of test-engineers are located in the rear of the liner.

Before carrying out certification tests of the passenger cabin, another 39 passenger seats will be mounted instead of the test equipment. In the complete set of the cabin, in particular, tests for emergency exit from the aircraft will be carried out. In accordance with regulatory requirements, such tests are carried out with the minimum permissible passage width in the cabin. 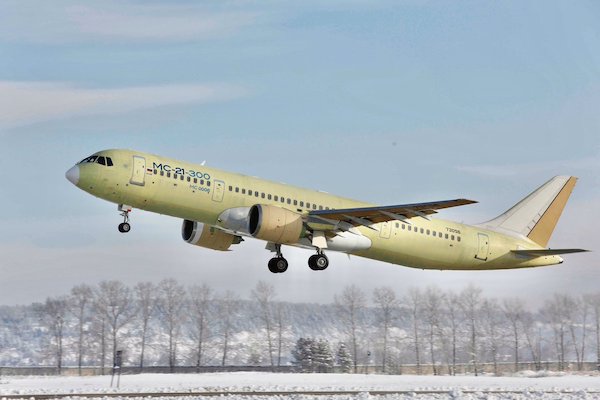 Loading comments for MC-21-300 flight-test aircraft with a high-density passenger cabin flew from Irkutsk to Zhukovsky...