In the year of the 60th anniversary of the Mi-8 maiden flight we revisit the history of this famous helicopter and its current modifications. Development activities for improvement of the Mi-8MTV-5-1 helicopter were completed in Mil&Kamov National Helicopter Center. According to Russian Helicopters (incorporated into the Rostec state corporation), the upgraded helicopter meets all current requirements of the army aviation of the Russian Aerospace Force. The next phases are series production and delivery to troops. 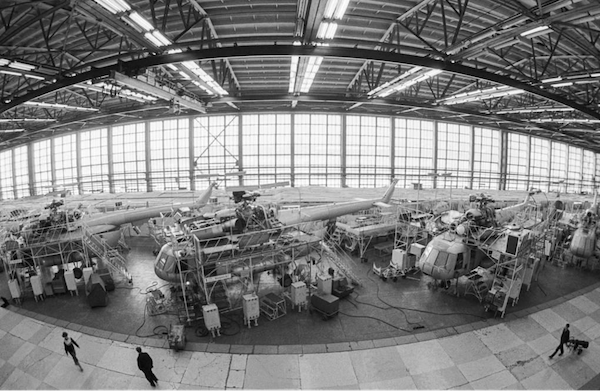 Birth of the legend

The Mi-8 (V-8 at early development phases) was created as part of an upgrade project of the Mi-4 multirole helicopter produced since early 1950s. The ‘Eighth’ model was initially planned to be fitted with a gas-turbine engine instead of a reciprocating one, with improved ergonomics and increased carrying capacity. The team of developers headed by designer Mikhail Mil eventually developed a new aircraft: the propulsion plant was transferred from the nose section to the space above the compartment, the cockpit was fitted with expanded glazing, and the tricycle landing gear was mounted instead of the quadricycle one.

On July 9, 1961, the first prototype model of the V-8 with a single turboprop engine AI-24 V and a four-blade propeller got off the ground. Test pilot Nikolai Lyoshin took off the V-8A prototype model with two TV2-117 engines and a five-blade propeller on August 2, 1962, and the helicopter conducted its first full-fledged flight on September 17 of the same year.

The new product had been shown at the air parade in Tushino and later displayed at the Exhibition of Achievements of National Economy as a show piece of cutting-edge technologies in helicopter production. Series manufacturing of the Mi-8 commenced in Kazan in March 1965.

The demand for Mi-8 was above all expectations: it even led to the launch of another series production facility in Ulan-Ude in 1970. The nondefense sector was the first one to give recognition to all upsides of the new helicopter. The Mi-8 is capable of operating in an environment of terrains that can hardly be reached by other means of transport, land and take off in small unprepared areas. The helicopter of such size and carrying capacity was highly sought after in remote regions of the country, where mineral commodities were mined and where no other transport could get to except for air transport.

A total of over 100 modifications of this versatile helicopter have been produced since the 1960s. Nowadays one can see the legendary ‘Eighth’ model machines all around the world: the helicopter has been supplied to more than 80 countries. The Mi-8 design turned out to be so successful that production of the helicopter and improvement of its design have continued since then.

In late August, Russian Minister of Defence Sergei Shoigu visited the Kazan Helicopter Plant of the Russian Helicopters holding company, and an upgraded version of Mi-8MTV-5-1 helicopter in service with the Russian army was showcased to him.

The Mi-8MTV-5-1 has been in service with the Russian military and security services since 2011. According to Rostec, it is designed for a wide range of tasks, including the transportation of cargoes up to 4 tons and engagement in search and rescue operations. One of the main features of the Mi-8MTV-5-1 is that the helicopter can navigate perfectly even in complete absence of light. The cockpit is equipped with lighting equipment, which – combined with night vision goggles – makes it possible to fly in the dark at extremely low altitudes, take off and land in unprepared areas.

An enlarged left door is another design feature of the Mi-8MTV-5-1 body. Instead of the standard manually hinged flaps, there is a ramp that opens with a hydraulic drive, which greatly reduces the time to prepare the helicopter for loading and unloading.

The new helicopter version, Mi-8MTV-5M, which was showcased to the Minister of Defense, has the most advanced airborne equipment: a multifunctional display, digital autopilot, modern communication system and an auxiliary power plant TA-14 of domestic production.

The Mi-8MTV-5M is also capable of night flights using night vision goggles, and its navigation and weather observation systems are integrated into a shared information field. Its advanced communications system is compatible with all helicopters supplied to the Russian Ministry of Defense and provides for exchange of data between the helicopters. The Mi-8MTV-5-1 helicopters in service can be upgraded to the design of the modernised Mi-8MTV-5M helicopters.

Serial production of the arctic Mi-8AMTSh-VA began in 2015 at the Ulan-Ude Aviation Plant (UUAZ, incorporated into the Russian Helicopters JSC).

The frost-resistant helicopter was designed specifically for the Arctic and Far North. The main features of the design include a unique unit heating system, which enables the helicopter engines to start easily even at -60 °C. The Mi-8AMTSh-VA is also equipped with improved thermal insulation of the body.

The additional external fuel tanks make it possible for the helicopter to fly over long distances (up to 1400 km). For the safety of the crew and passengers, special maritime life suits are placed on the board. 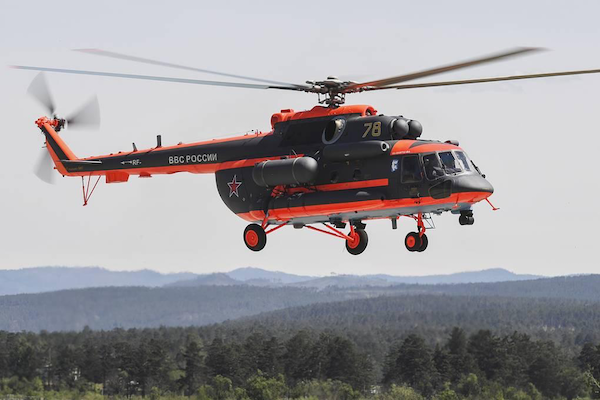 Air mobility operations, fire support, special forces support - this list of what the new Mi-8AMTSh-VN military utility helicopter can do is by no means full.

The helicopter was developed by the Mil Helicopter Plant on the basis of Mi-8AMTSh, also known by its fearsome name "Terminator". The prototype of this class was first demonstrated to the general public at the 2017 MAKS Air Show.

According to the manufacturer, an on-board defense system and titanium and kevlar armor increased the survivability and protection of the helicopter. The armor protects not only the crew and the most important units of the helicopter, but also the cargo cabin with the paratroopers. The Mi-8AMTSh is equipped with two sliding doors and additional hatches for faster disembarkation.

The helicopter is armed with 12.7 mm machine guns, unguided missiles, bombs of various capacities as well as a guided missile system with a target sight system, which enables the helicopter to fight air and ground forces, eliminate enemy strongpoints and armored vehicles.

The new main propulsion system is based on an improved rotor with all-composite blades of an advanced aerodynamic configuration. Combined with more powerful engines, it increases the maneuverability, flight speed, and performance during operations in high mountains and hot climates. Another important feature of the Mi-8AMTSh-VN is a more efficient X-shaped tail rotor.

The helicopter features a gyrostabilized electronic optic system with an infrared search light and a double-range lighting, with the support for night vision goggles. The majority of battle mission tasks can be performed automatically thanks to the integrated navigation instruments and a digital autopilot. This will reduce the crew's workload during the mission.

A New "Heart" for Civil Aircraft

Mi-171A2 (Ми-171А2) utility helicopter is one of the latest modifications of the Mi-8/17 type; this is a total redesign of the civil model Mi-171A1 certified in other countries. Modifications were made to the main rotor system with transmission, to the electronics, and to the machine's "heart", its engine.

Turbo-shaft engine VK-2500 (ВК-2500) has been designed by the United Engine Corporation (ODK) under the Import Substitution Programme. The engine has replaced TVZ-117 (ТВЗ-117) used in the latest series of Mi-8/17 helicopters (an engine of Ukrainian production). Mi-171A2s are currently equipped with the latest modification of VK-2500PS-03 (ВК-2500ПС-03), a civil version of engines installed in the Mi-28N (Ми-28Н) attack helicopters.

The new engine features a state-of-the-art electronic system of automatic control and anti-surge control designed in Russia. Automatic adjustment and control module BARK-78 (БАРК-78) designed by ODK-Klimov made it possible to increase the emergency power rating, maintain operations in a widened range of outside air temperature, and improve resource and fuel efficiency.

The engineers who designed the plant assure that with this type of engine, the helicopters are reliably protected from engine failures due to strong wind currents or sharp air pressure drops in hot climate or in mountainous regions.

The on-board equipment was also re-designed for Mi-171A2. Using a KBO-17 (КБО-17) digital system designed by the Radio-Electronic Technologies Concern based on the concept of "glass cockpit" with a navigation setup and video cameras has improved visibility for operating the external loads. In addition, the helicopter is equipped with the modern collision avoidance systems for terrain, aircraft, and other objects.

"Rostec is currently improving specifications of Mi-171A2 helicopter for taking off, landing, and transporting passengers in mountainous regions with altitude of up to 5,000 meters above sea level," TASS was told by Rostec's Senior Deputy General Director Vladimir Artyakov. "An individual oxygen kit will be installed for each passenger and every member of the cabin crew. A testing programme followed by the approval of major amendments to the helicopter's certificate by the Federal Air Transport Agency is scheduled for 2022; after that, a procedure to validate this option will begin in air authorities in India and other countries." 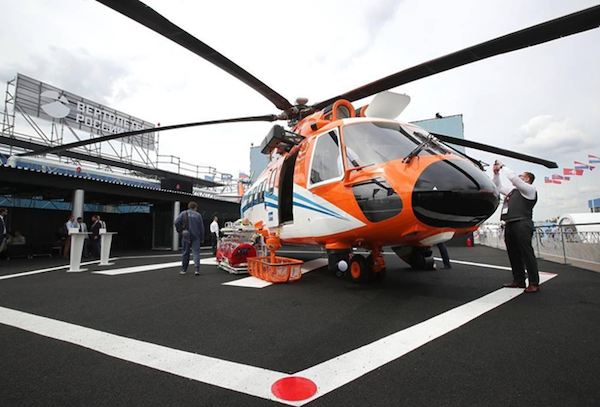 In 2022, a flight testing programme will commence for the Russian off-shore helicopter Mi-171A3. It has been designed to assist oil and gas companies that are moving away from the shore in search of new offshore fields.

"Helicopters are crucial for offshore rigs operating in severe climates. Today they perform over one-third of all offshore tasks. The fleet of helicopters operating in the fields consists of two parts. Some helicopters are intended for passenger transportation, others are used for search and rescue operations," Mr. Artyakov says.

Mi helicopters used to fly out to sea shelf back in Soviet times, when they earned a reputation of reliable machines that lend themselves well to such operations. For instance, Mi-8T can take up to 24 passengers and transport them over a distance of 500 km. However, these old models do not meet the latest airworthiness standards, especially when it comes to safety of flying over water. They also have outdated on-board equipment and have poor fuel efficiency.

Design development of the new Russian off-shore helicopter commenced in 2018; in February 2020, Russian Helicopters jointly with fuel and energy companies approved the new external design of the helicopter.

With a maximum take-off weight of 13,000 kg and a flight range of up to 1,000 km, Mi-171A3 meets helicopter operations safety requirements in the energy sector of IOGP, the International Association of Oil & Gas Producers. In addition, this helicopter features a ditching system and emergency rafts.

“One of the most important features of these helicopters is their ability to fly in inclement weather conditions. Mi-171A3 lends itself well to all-weather operation in any climate: sea, tropical, or cold, with air temperature from -50 to +50 Centigrade, at any latitude, and even in frost buildup conditions. The helicopter's search and rescue capabilities have been a priority in the process of design. To that end, the helicopter is equipped with a search-and-rescue kit and emergency equipment.” Sais Vladimir Artyakov, Senior Deputy General Director of Rostec

Mi Class development is under way. New engines, aircraft electronics, main and steering rotors, navigation systems, and the use of composite materials enables Mi-8 helicopters to meet the latest aircraft requirements. In terms of quantities, Mi-8/17 helicopters are responsible for 90% global market share in the class of heavy civil helicopters (MTOW 10-16t) over the last few years. According to designers from the M. L. Mil and N.I. Kamov Russian Helicopter Plant, the 'eight' has an unlimited potential for upgrading. 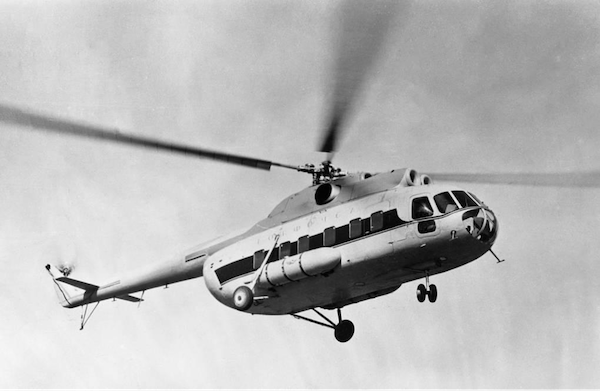 
Loading comments for Mi-8 evolution - how legendary model manages to keep up with time...