As of August 4th 2021, the RED A03 engine has gained acceptance for installation in New Zealand registered aircraft. Approval was granted to two variations of the engine. The New Zealand Authority accepted both the RED A03-003 and the RED A03-102.

Enrico Evers, Head of Sales RED aircraft GmBH commented: "The acceptance of the powerful and highly efficient engine is another accolade for RED aircraft. It presents the company with exciting opportunities to utilize the powerplant in different types of aircraft in New Zealand. Engines with high power output, such as the RED A03, are particularly beneficial in agricultural aircraft, used extensively in the country".

The RED A03 has been approved by the European Union Aviation Safety Agency (EASA), The United States Federal Aviation Authority (FAA), and the Russian Federal Air Transport Agency (FATA). The addition and approval of the New Zealand Authority serve further to demonstrate the versatility and reliability of this unique engine.

The RED A03 offers significant benefits to many operators in a diverse range of fields. The engine's high power output makes it ideal for use in aircraft requiring short take-off capability. The powerplant also allows operators to increase the maximum permitted take-off mass. The phenomenal output of this engine is also particularly useful in areas of high terrain. The RED A03 boasts excellent high altitude performance.

Operators utilizing the engine can expect to see further benefits. Compared side by side with engines producing similar output, the RED A03 consumes up to 40% less fuel. The engine's versatility is further increased by its ability to utilizes JET A1 fuel

In a country as wild and remote as New Zealand, reliability and safety are of crucial importance. When choosing a powerplant for single-engine aircraft, operators need an engine that offers a high degree of redundancy. The RED A03 features two cylinder banks, each capable of independent operation. The RED A03 is a solid choice when it comes to flight safety.

Remote and isolated airfields, such as those found in New Zealand, don't always offer advanced maintenance facilities. The RED A03 powerplant was custom designed to allow cost-effective and easy maintenance. It features onboard FADEC with its own memory. This system can give advanced notice of technical unserviceability. This allows operators to make early decisions and perform a very accurate diagnosis of faults. As a result, this reduces aircraft downtime.

Gaining acceptance by a national authority is no small feat. Engine manufacturers have to satisfy stringent requirements. This includes an extensive review of all the engines' technical data, documentation, capabilities and performance. RED Aircraft is delighted to have succeeded in all of the above areas, gaining approval from the New Zealand Authority as a result. 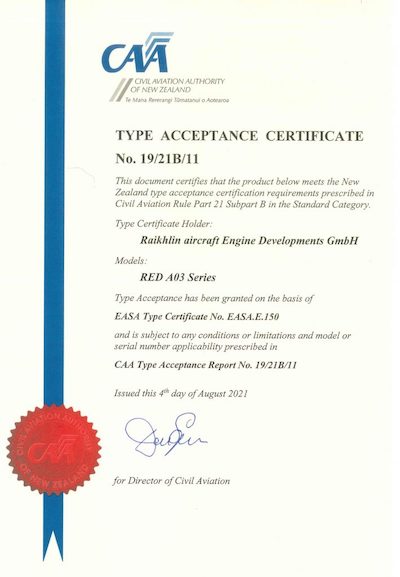