Textron Aviation has successfully mated the wings to the fuselage of the first Cessna SkyCourier twin utility turboprop prototype aircraft, a key milestone in the development of the clean-sheet aircraft. “As expected, the operation was sound as the wings were secured on the fuselage, and the new Cessna SkyCourier took another major step in its development,” said Chris Hearne, senior vice president, Programs and Engineering. “The Cessna SkyCourier’s rugged, high-wing design will give the aircraft excellent operational and performance characteristics for its diverse mission profile.” 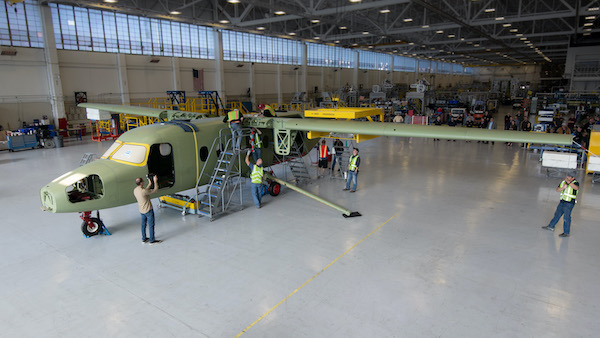 The program is progressing considerably with the assembly of the prototype and additional five flight and ground test articles. Landing gear testing continues as well as avionics ground testing. First flight of the Cessna SkyCourier is anticipated in 2020.

Relentless capability
The Cessna SkyCourier will be offered in various configurations including freighter, passenger or combi, all based on a common platform with a 6,000-pound payload. The freighter configuration is designed to accommodate three standard air cargo containers (LD3) while the passenger variant carries up to 19 passengers and baggage.


Loading comments for Next phase of Cessna SkyCourier development begins...

Post Covid in business aviation, what is going on and how companies are thinking and acting outside the box? Here is a fresh example - Jetcraft has set up a kiosk at Nice Airport this summer...