AURA AERO has jusr received Subpart G approval for all of its industrial facilities, an approval mandatory for officially launching serial production of the INTEGRAL family. The PART 21 Subpart G approval was delivered to AURA AERO by Guy Tardieu, president of OSAC, the French authority for civil aviation safety, after 18 months of audit on the Toulouse-Francazal and Bernay (Air Menuiserie) sites, and at the main subcontractors.

This approval certifies that the production of aircraft parts is compliant with their design, and once extended to the whole aircraft, will allow the company to start serial assembly activities, mostly for INTEGRAL R (two-seater, thermic engine, taildragger landing gear), the first of which will be delivered to two French flying clubs, Midi-Pyrénées Voltige and Dijon Voltige.

« In the name of the AURA AERO teams, I am very happy to obtain the PART 21 Subpart G approval for our industrial facilities. This approval marks a new milestone in the history of our company and enables us to officially launch serial production of INTEGRAL R, and soon of INTEGRAL E and ERA, taking a step forward towards decarbonated aviation», said Jérémy Caussade, Co-founder and President of AURA AERO.

« This approval validates all of our installation facilities and production processes, which is very important for us as a new aircraft manufacturer, since we can now begin serial production and deliver our first customers. PART 21 Subpart G is hard to obtain, so this is a true recognition of our innovative production system and comforts us as leading industrial company", added Fabien Raison, Co-founder and Chief Operations Officer of AURA AERO. 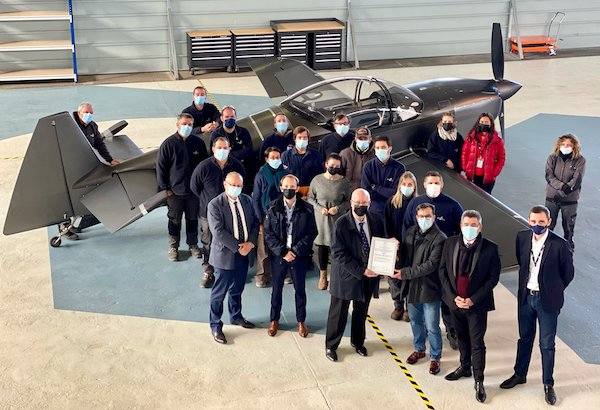