The PMI Project of the Year Award recognizes a large and complex project that best delivers superior performance in terms of project management practices, superior organizational results, and positive impacts on society. The Institute also highlighted Embraer’s challenge to bring a family of commercial aircraft to market on schedule and on budget, as well as exceeding several performance targets.

According to the Project Management Institute, the E190-E2 was an extremely complex program, with a virtually new airplane, a new production system, a new and more connected airplane and customer support, and a new global supply chain spread throughout the US, Brazil, Europe and Asia.

“Embraer built a heritage out of challenging the impossible, starting with the dream of producing airplanes in a country that did not even manufacture bicycles. This passion was passed from generation to generation and 50 years later, the E2 team has proven that it is possible to dream big and develop a new and high-tech commercial jet, outperforming even the highest expectations with a short schedule, a limited budget and a benchmark spec,” said Fernando Antonio Oliveira, E2 Program Director. 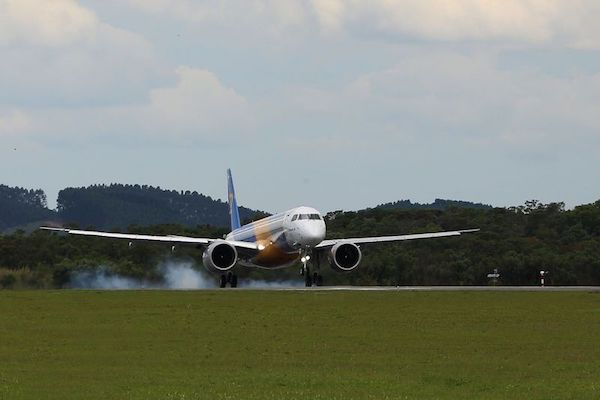 “The E2 represents a new benchmark for crossover jets, and we are honored to receive this prestigious award, recognizing the excellence of all Embraer’s teams involved in the program,” said Luís Carlos Affonso, Embraer’s Vice President of Strategy, Innovation and former COO of Embraer Commercial Aviation. “I would also like to recognize the importance of the PMI in our journey towards excellence in program management, as it has provided invaluable guidance to Embraer since the 1990’s, when we decided to better structure this function within our Company.”

Embraer launched its E-Jets E2 program in 2013. The new-generation E-Jets family of commercial aircraft is comprised of three new airplanes – E175-E2, E190-E2, E195-E2 – with seating capacity for 70 to 146 passengers. The E-Jets E2s represent the best combination of new technologies in a proven platform. The application of advanced technologies for engines, wings, and avionics sets the E2 apart, by providing airlines with the most efficient aircraft in the category, while maintaining commonality with the first-generation E-Jets.