CNIM Designs and Validates the Rotation System That Will Enable the StratobusTM Airship to Operate Autonomously for up to One Year!

Stratobus is an 85,000 cu. m airship designed to operate at an altitude of 20 km, in the lower layer of the stratosphere. Equipped with four electric motors powered by solar panels during the day and batteries at night, the vehicle is fully autonomous from an energy perspective and is able to remain on station for a full year. Under ideal conditions, it can carry a 250 - 450 kg payload. Stationed just above air traffic and considerably closer to earth than a satellite, Stratobus is designed to perform civilian and defense missions in areas such as telecommunications, surveillance, observation and navigation. 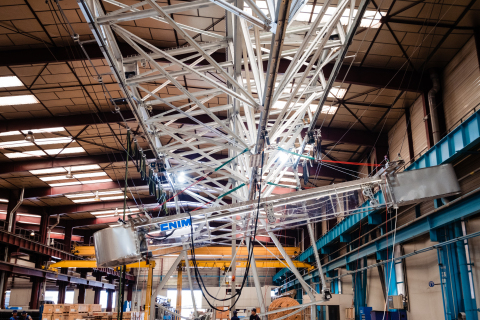 The “Gondola Mobility System”, a special subassembly on which the Stratobus communication and/or monitoring payloads are mounted, will enable the aerostat to rotate around its longitudinal axis.
This is necessary to enable the aerostat’s solar panels to track the sun’s movements in order to efficiently benefit from its radiant energy. It is a critical system for the Stratobus’s operation and energy independence. The nacelle has been trialled on a full-scale test bed (30m in length and 10m tall) built by CNIM at its workshops in La Seyne, south of France. This test bed enabled many parameters to be validated in preparation for the maiden flight.

The current steel nacelle attached to the test bed is the same volume and weight as the planned carbon nacelle (plus payload) that will be installed on the Stratobus. This assembly is designed to demonstrate that the nacelle is indeed able to rotate the balloon so that it maintains the ideal orientation relative to the sun. A joint patent application with Thales Alenia Space has been filed for the “Gondola Mobility System”.

With the acquisition of AirStar Aerospace, which was already involved in developing the airship’s flexible fabric shell and creating scale models, CNIM has consolidated its status as a key partner of Thales Alenia Space for the Stratobus programme.

Loading comments for Rotation System Will Enable the Stratobus Airship to Operate Autonomously for up to One Year...