Russian Helicopters are present at Airshow China 2021, including in digital format.Because of Covid restrictions, official delegations have been greatly reduced. Therefore, the format of online representation for Russian helicopter technology was chosen as part of Rostec State Corporation's unified exposition.China is Russia's most important strategic partner in the supply of aviation equipment. Currently, about 350 helicopters manufactured by Russian Helicopters are in operation in the PRC for civil and law enforcement agencies.

Ka-32s has proven its worth in firefighting and rescue operations. Mi-171 extinguishes fires, transports cargo and performs many other operations. The world's largest Mi-26 helicopters are actively involved in disaster relief, transporting large equipment and humanitarian aid.

" China is projected to become the world's second-largest aviation market in the next two decades. The Chinese government invests significant resources in aviation development," said Oleg Landin, Director of Marketing and Business Development at Russian Helicopters. We are ready to offer our Chinese partners a wide range of helicopters, distinguished by high flight and technical characteristics, reliability and optimal price-performance ratio. It includes the latest Mi-171A3, which meets all global safety standards for flights over water, the mid-sized multi-purpose helicopter Ka-62, light Ka-226T and modernized Ansat-M and Ka-32A11M, as well as unmanned BAS-200 and VRT-300 aircraft systems."

Ansat-M is a light twin-engine multipurpose helicopter. It can be transformed into a passenger or cargo version and equipped with a medical module. Ansat is certified for the installation of an emergency landing system and a cargo winch. An upgraded version of the Ansat-M helicopter is undergoing flight tests. The helicopter is equipped with a new fuel system, providing a greater range. The share of composite materials has been increased from 15 to 35%, which allowed to reduce aircraft weight and to integrate of new avionics. In besides, Ansat-M got main rotor with improved aerodynamics and will receive new tail blades. Their use will increase speed and flexibility, as well as help to reduce the noise level in helicopter cabins. A new anti-icing system and a 3-channel autopilot are planned for an aircraft. 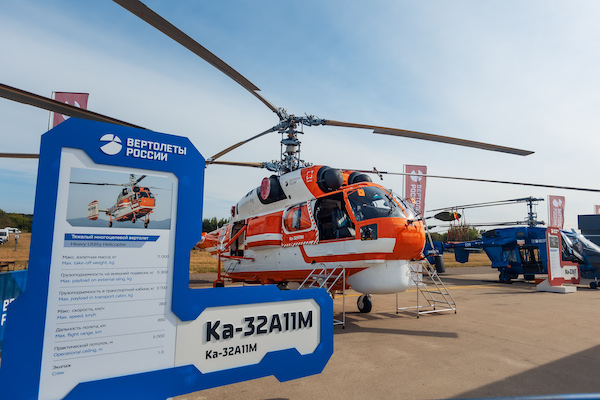 Ка-32А11М is a deep upgrade of internationally proven Ka-32A11BC.  The helicopter is equipped with modern gas-turbine VK-2500PS-02 engines with an electronic digital automated control system. Because of higher engines power, it can be used an external suspension with a payload increased to 5300 kg. Ka-32A11M has received a "glass cockpit" - a new digital set of onboard equipment KBO-32, which will allow using helicopter at any time of day and night, in any weather, on land and at sea. The helicopter's onboard networks and switchgear were upgraded, as well as the interior and exterior lighting. The cockpit is adapted to use with night vision goggles. Its firefighting capabilities were significantly expanded by the new firefighting system SP-32. Such a system can deliver up to 4,000 liters of fire-extinguishing fluid to the point of fire and perform its controlled release, including in sub-zero temperatures.

Ка-226Т Climber is an upgraded light modular coaxial helicopter. Upgraded Ka-226T has such key features, as an ideal adaptation for high altitude flights and the modification project received working name Climber. This aircraft features low vibration, ease and simplicity of operation, the ability to take off and land on sites of minimum size (including in urban infrastructure, as well as on ships and vessels), high accuracy of hovering even when working with cargo on the external suspension and safe passengers landing with running blades.

The helicopter has a new airframe design with significantly improved aerodynamics. Its fuselage has been manufactured using modern lightweight materials, control system and electrical system have been upgraded, and an impact-resistant emergency fuel system, in line with increased safety requirements, has been installed. In addition, fuel tanks volume has been increased with the provision for centralized refueling. A new complex of pilot navigation and radio communication equipment is also provided. The flight speed has been increased, empty helicopter weight reduced, and application range extended. Aircraft is operated at altitudes of up to 6500 m and can be equipped with oxygen equipment, cylinders, air conditioning and a heating system as an option. His certification for passenger transportation is planned. 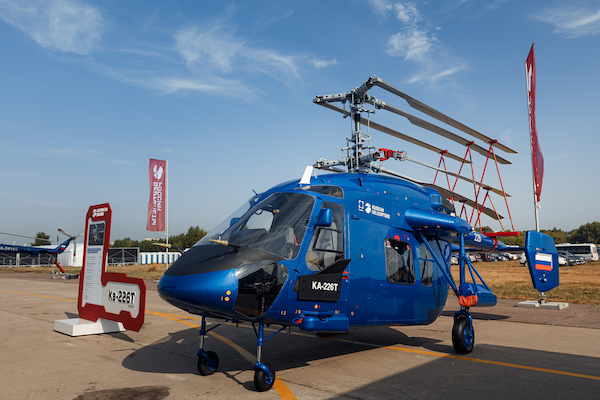