Safran Electrical & Power and AURA AERO announced an agreement to work together on the architecture and electric propulsion systems of two aircraft: the INTEGRAL E training aircraft and the Electric Regional Aircraft. Safran Electrical & Power will supply the propulsion system for the INTEGRAL E flight demonstrator (the electric version of the INTEGRAL). This is the aerobatic-capable two-seater training aircraft developed by AURA AERO. This prototype will feature a smart ENGINeUS™ electric motor able to deliver more than 100 kW, and the GENeUSGRID distribution and protection system. The whole system will produce zero CO2 emissions and will generate less noise and conventional aircraft. Around sixty or so orders are already expected for the INTEGRAL E. The first flight is scheduled for 2022, and deliveries are slated for 2023.

Safran Electrical & Power has also signed a Memorandum of Understanding (MOU) to work with AURA AERO on conducting the electrical architecture studies for ERA, a 19-seater regional commercial aircraft with electric propulsion. These studies will focus on the high direct voltage propulsive architecture which will deliver the power needed for the electric engines. The jointly-conducted work will also include the “non-propulsive” electrical architecture, used to power the aircraft’s other systems. It is thought that several hundred orders will be placed for AURA AERO. The aircraft is slated to make its first flight in 2024, with entry into commercial service planned for 2027.

“Safran Electrical & Power is extremely proud to be partnering AURA AERO on these two ambitious aircraft programs. In every way, these projects are in line with our strategic aims: they feature breakthrough technologies, have a low-carbon footprint and are electrically powered. This agreement bolsters our position as a key player in the fields of equipment electrification and electric and hybrid propulsion. It also marks two Toulouse-based companies – both firmly established in the Occitanie region's industrial fabric – working together”, said Hervé Blanc, General Manager & Executive Vice President of the Power division at Safran Electrical & Power.

“This joint project between an aircraft manufacturer and an expert in aeronautical electrical systems is a milestone – one that is essential if we are to develop electric aircraft. In 2022, this collaboration will result in the 100% electric INTEGRAL E training aircraft taking to the skies, which will be EASA & FAA certified in 2023. As part of the joint aim to industrialize production of electric aircraft, Safran is providing its rare expertise in high-voltage networks, which is needed for the INTEGRAL E and ERA architectures. This collaboration is evidence of our shared determination to decarbonize the aviation sector", added Wilfried Dufaud, Co-Founder & Chief Programs Officer of AURA AERO. 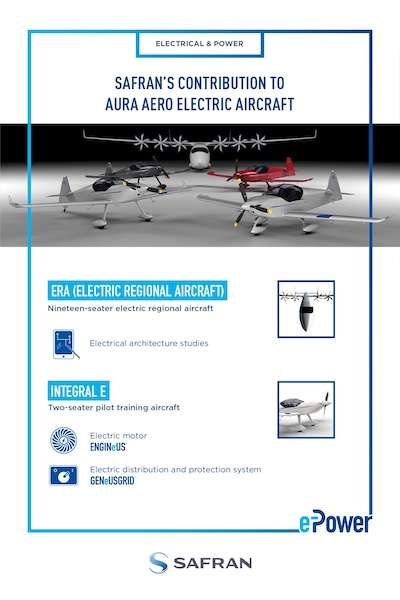 Loading comments for Safran to work with AURA AERO on the architecture and electric propulsion systems of the INTEGRAL and ERA aircraft...