Two ENGINeUS™ 45 motor versions will be installed in forward-facing positions on the wings of VoltAero's Cassio 1 testbed as part of this aircraft's "push-pull" propulsion configuration. The ENGINeUS™ 45 delivers a continuous power of 45 kW and features built-in, dedicated control electronics.

"Since our unveiling of ENGINeUS™, we have worked daily to continually improve the motors' exceptional performance, and we've just started their industrialization to address the emerging market of more-electric aircraft," said Hervé Blanc, Executive Vice President & General Manager of the Electrical Systems and Motors Division at Safran Electrical & Power. 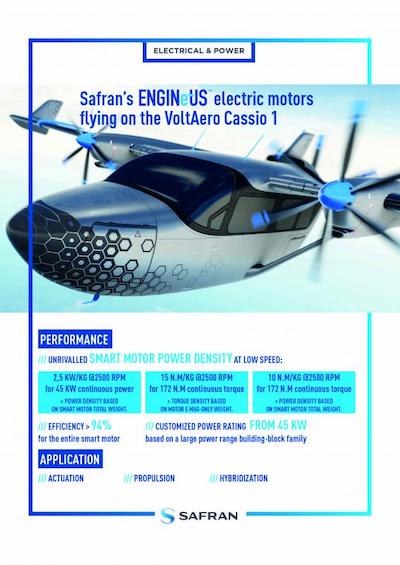 VoltAero will integrate the two ENGINeUS™ 45 motors on Cassio 1 to replace a pair of earlier-generation electric motors that were utilized during initial testing. The Cassio 1 testbed is validating VoltAero's design of an all-new hybrid-electric aircraft with seating for four to nine passengers, which is tailored for operation by private owners, air taxi/charter companies, in commercial flights for point-to-point regional travel, and in various utility-category applications.

"VoltAero is at the forefront in introducing a new era of safe, efficient and eco-friendly flight," stated Jean Botti, the VoltAero CEO and Chief Technical Officer. "With the use of ENGINeUS™ 45 motors, we will fully benefit from Safran's cutting-edge technology in smart, efficient and optimized electric propulsion."

The ENGINeUS™ product line includes a range of electric motors with power outputs of up to 500 kW. Its technology optimizes the electrical architecture by consolidating several key conversion, control and battery interface functions – with the motors' mechanical and structural characteristics perfectly suited to their use on aircraft.