For the specific mission requirements at the Andoya Space Center, the DA42 MPP was equipped with a Trakka TC-300 EO/IR camera combined with a Viasat Enerlinks III HD Line-of-Sight Data Link. During various mission scenarios, including but not limited to maritime surveillance and range clearance missions, at day and night, the DA42MPP demonstrated its capacity in searching, locating and identifying potential threats at an unrivaled cost per hour. The data acquired by the aircraft were streamed to the headquarters in real time and provided the attending delegations with the highest possible level of situational awareness.

Andøya Test Center (ATC), within Andøya Space Center is a versatile and cost effective test range for test and validation of aerospace- and ship-based applications. The range is equipped with the most modern instrumentation and infrastructure available. Located on the island of Andøya in northern Norway, a few kilometers north of the Arctic Circle, the test range has round-the clock daylight during summer. In the winter months the climate is well suited for arctic testing. 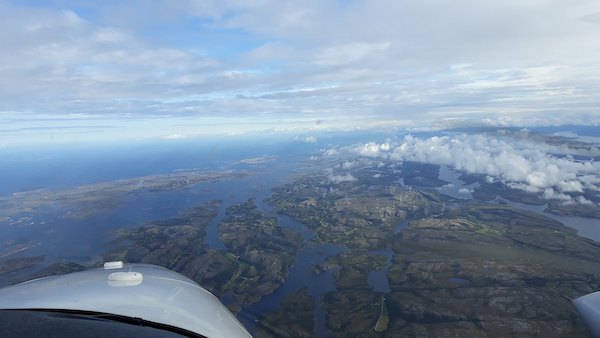 Mats Mikalsen Kristensen, Operations Manager at Andøya Space Center: “Trough two weeks in August/September we have had the DA42 MPP equipped with Trakka TC300 Gimbal and Viasat Line-of-Sight downlink for demonstration and testing. The surveillance platform has fulfilled all jobs put at its challenge, from maritime surveillance, land surveillance, power line inspection and more. Specially the long flight endurance made it able to perform tasks that otherwise have been performed by several aircraft. We thank the professional crew and Diamond for the cooperation and are aiming at ordering this cost efficient professional solution at a later stage.”

Markus Fischer, Director, Diamond Special Mission Aircraft: “The DA42 MPP has again proven its flexibility and robustness while operating in maritime environment, in this case even at latitudes of up to 72 degrees North. As seen during the campaign, the level of information provided on ground in real-time compared with the cost incurred is unmatched in the industry.”

Mario Spiegel, Sales Manager, Diamond Special Mission Aircraft: “Demonstrating maritime surveillance capabilities on a single trial in a known environment is one thing, but continuously performing over two weeks, deployed to an unfamiliar area, quite another thing and shows how reliable and efficient the DA42 MPP is in such kind of operation. We didn’t even deploy a technician to Andoya, which shows the very small logistical footprint that is needed to operate this system.”

Stefan Haim, Technical Manager, Diamond Special Mission Aircraft: “After arriving at the customer’s site the installation of the downlink and crew briefing could be done in less than a half day so that the first mission could be flown. The downlink worked reliable and the live footage was distributed over the customer’s network. Thanks to the intuitive hand control unit of the TC 300 and the capability to operate the camera via tablet the operator training was simple, effective and after a short time the camera was mastered by the customer.”

Fanni Pajer, Pilot, Diamond Aircraft Austria: „The stunning performance of our DA42 MPP made it possible to have an endurance of about up to 9 hours with loitering power setting, which was of great advantage for this mission.“

Adam Boniecki, Business Development, Trakka Systems AB: “Trakka is extremely pleased to be part of Diamond’s mission system. These trials further demonstrate the reliability and performance of the TC-300 under all weather conditions, from near artic to tropical environments.”