Do you ask yourself how it work, when you use modern inflight Wi-Fi capacity? Maybe because I am curious, I was wondering what is the mechanism, how comes we can be so connected nowadays while flying. Here are some details regarding the launch the successful launch of GX5, which will deliver increased capacity for airline and business aviation customers in Europe and Middle East. Inmarsat confirmed the successful launch of the fifth satellite in its Global Xpress (GX) network that delivers the award-winning GX Aviation and Jet ConneX  inflight broadband services.The satellite was launched by an Ariane 5 rocket from Kourou, French Guiana. It will bring additional, focused capacity over Europe and the Middle East to meet growing demand for high-speed passenger Wi-Fi in the airline and business aviation markets. GX Aviation customers include leading airlines such as Qatar Airways, Air New Zealand, Lufthansa, AirAsia and Singapore Airlines, while JX has been activated on more than 600 business jets.

Philip Balaam, President of Inmarsat Aviation, said: “The successful launch of GX5 represents a pivotal moment in the development of GX Aviation and Jet ConneX. This next generation satellite will deliver more capacity to Europe and the Middle East than the combined entire existing GX fleet (GX1-GX4) does worldwide, ensuring that Inmarsat’s aviation customers remain at the cutting-edge of passenger connectivity technologies as their needs evolve.

“The launch of GX5 also marks the start of our ambitious development roadmap for the GX network, with seven additional satellites being launched in the coming four years. This will cement our ability to provide gold standard connectivity to the airline and business aviation markets, meeting fast-growing demand throughout the world for decades to come.” 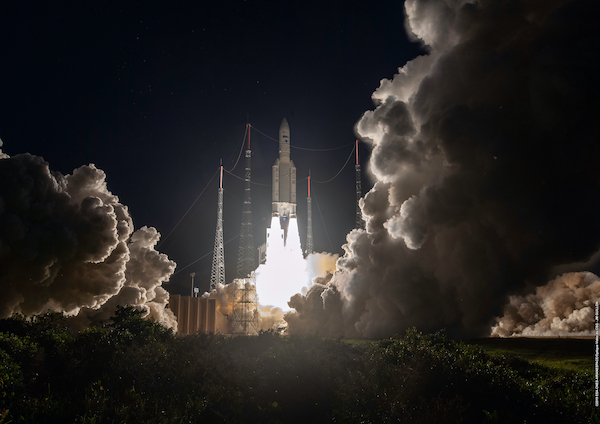 GX5 was built by Thales Alenia Space and launched by Arianespace at 21:24 UK time on Tuesday 26 November 2019. Following satellite separation from the rocket at 21:58 UK time on 26 November, telemetry was successfully acquired shortly after separation and the mission is proceeding to plan.

The launch teams from Inmarsat and Thales Alenia Space will now deploy the satellite’s solar panels and antenna reflectors while raising its orbit to geostationary altitude (approximately 36,000km above the Earth). They will then carry out rigorous testing and calibration before the spacecraft enters commercial service.

In less than four years, GX has established itself as the benchmark for reliable communications across the fastest growing sectors for mobile connectivity. GX5 and the forthcoming seven additional GX payloads further extend Inmarsat’s global leadership in true broadband services, which are supported by the company’s network of world leading technology, manufacturing and channel partners.