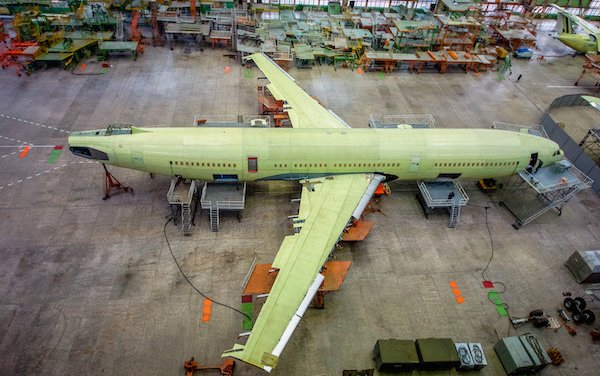 The works upon building up the long-haul widebody IL-96-400M aircraft are carried on at the final assembly shop on VASO aviation plant in Voronezh.

The new aircraft is developed as a modification of the mass-produced IL-96-300 with a fuselage 9.35m longer than its predecessor with the additions for the original type certificate. The newly built is to maintain high reliability specifications as its famous forerunner. Work on the programme is on schedule.

«At the moment, the main parts of the airframe for the first flight prototype are being connected. The process of affixing the wing to the fuselage is completed. At the next stage, we are going to set the empennage and the pylons. Our specialists are carring out the installation of the main aircraft systems. The aircraft is intended to be finished before the end of 2020, at which point it will be sent to the flight test station,»- said Alexander Yarchevsky, acting Managing Director of VASO.

IL-96-400M will be equipped with modern Russian-made flight-control navigation and radio communication equipment, which will allow fulfilling the current and upcoming requirements of the international aviation authorities.


Loading comments for The airframe for the first IL-96-400M airliner is at the final assembly stage...