The flight testing in Pozzallo successfully completed - SH09 is back home

Since the resumption of the test flight activities in June in Pozzallo, Sicily, our third prototype (P3) has completed 40 flights, allowing testing of multiple aerodynamic modifications and configurations. The current configuration fitted on P3 has seen a significant improvement in smoothness and stability.

Recent upgrades include an engine cowling extension for improved aerodynamics, a variable asymmetric tail plane at the best available incidence, the removal of the end plates and a larger upper vertical fin improving stability.

Richard Grant, Kopter Chief Test Pilot, commented:  “P3 returns to Mollis a very different aircraft. The changes that have been implemented this year have made a real improvement to the handling of the aircraft. Now we are able to further expand the envelope and start to realize the aircraft’s true potential”

This most recent block of flight tests has been the most productive in terms of the number of modifications assessed and the general improvements realized. Early analysis and observations confirm the validity of the new design concepts. This achievement is a result of the work of all teams involved, utilizing the analysis and feedback from all the previous flight test blocks of P3. The SH09 is more and more reaching the planned overall performance and capabilities as development moves ahead.

For the next chapter in the SH09 evolution, P3 is back to our facility in Mollis; the upcoming upgrades require a strong support from the Engineering and Operations teams.

On return to Mollis, the test priorities are to explore the capabilities of the new tail rotor and the recent aerodynamic modifications throughout the low speed envelope. We will then proceed with the upgrade to Garmin avionics and then of the final main rotor head and flight controls.

We will be happy to share images of our P3 flying in its “home” environment as well as first results of this new flight test phase in the coming weeks. 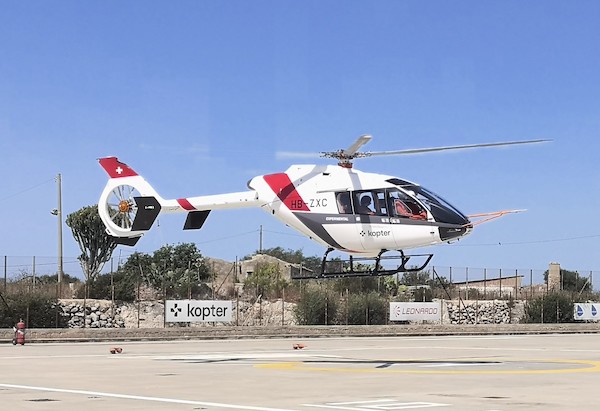 Loading comments for The flight testing in Pozzallo successfully completed - SH09 is back home ...