This past Tuesday a plane went down in New York’s Hudson River.

The cops were called. Firefighters and emergency medical technicians arrived on the scene.

But instead of a frantic group of passengers floating in a downed Airbus A320, like 2009’s Sully Sullenberger “Miracle on the Hudson” moment, officials encountered a delighted group of reporters gathered to test out the Icon A5, a small seaplane that was using the river to take off and land. Everything was going fine, but unknowing onlookers were not used to seeing planes flying so close to the river, so they'd called for help. Firefighters and cops, realizing nothing was amiss, stuck around to admire the spectacle. Indeed, the only potential damage at the event was what the Icon A5 will do to the $219 billion private aviation industry1. 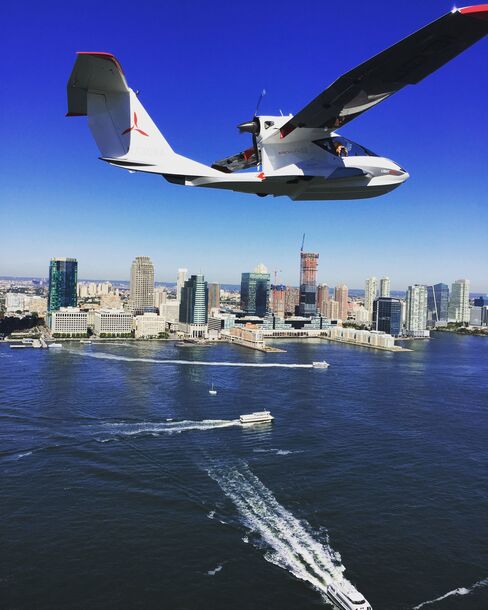 A view of the Jersey City skyline and the busy Hudson River during our NYC test flight.

“If I already have a float plane, why would I want this?” asked one fireman, whose son is currently learning to fly the more traditional seaplanes in flight school. He was snapping a smartphone pic of the 28-foot-long, white-and-red amphibious aircraft bobbing calmly at the dock.

Icon's founder and chief executive, Kirk Hawkins, didn’t hesitate with his reply: “Just look at it!”

It’s hard to argue with the A5’s good looks. Lean and angular as a hawk, it looks like a marriage of a Piper M-class and a Jet Ski, with a little bit of sportscar thrown in. You wouldn’t blink if you saw it in the Hammacher Schlemmer catalog. It's not quite like anything that's come before it—cheaper and more oriented to recreation than most planes and more portable and manageable than many boats. In fact, it's not really aimed at current pilots—Icon's founders hope to develop an entirely new market of amateur aviation enthusiasts.

“We want to get airplanes out of airports and into the home,” said Hawkins. You can fold the wings up and store it in your garage or put it on a trailer and tow it to a lake or flat, grassy field. It can run on premium unleaded gasoline you’d find at any pump. “It's transportable, not just a transport device. This plane is designed for recreation.” 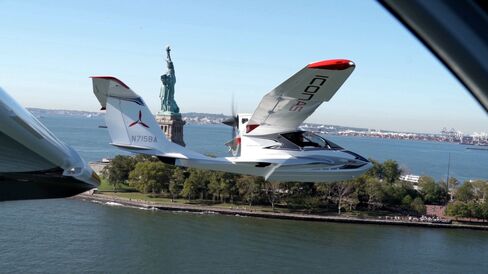 Icon Aircraft was founded in response to a 2004 regulatory change by the Federal Aviation Administration (FAA) that created the Light-Sport Aircraft category, a new designation of personal aviation pegged to a less-intense though more restrictive Sport Pilot License (SPL)—daytime flying only, in good weather only, in uncongested airspace. Just 20 hours of flight training are required, as opposed to more than double that for a typical private license; Hawkins says you could earn it in roughly two weeks. As fellow Palo Alto startups are want to do, he aimed to capitalize on this “disruptive moment” and create the first mainstream, pure-sport aircraft. (Eric Schmidt of Google and JetBlue’s Joel Peterson are both investors.)

“Most airplanes aren’t built for the flying experience. They’re built to move stuff or people from A to B,” said Hawkins. “This plane has elevated the flying experience first, so you have a very visceral connection with the flying environment. We want to make the barrier to entry lower for anyone whose dream is to fly.” 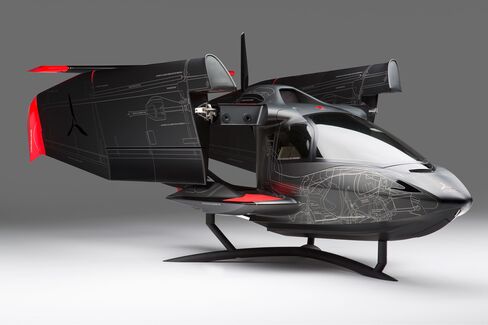 A rendering of the Icon A5 with its wings folded.

Built of a lightweight carbon fiber with retractable landing gear and a 34.8-foot wingspan, the A5 weighs around 1,000 lbs and seats two for a maximum weight of 1,510 lbs. Its 100-horsepower Rotax 912 engine has a maximum speed of 110 mph and a range of 450 miles on 20 gallons of gas (auto or aviation). The maximum altitude for SPL is 10,000 feet. Inside, the unpressurized cockpit takes cues from sports cars, and the UV-coated canopy offers 180-degree views, unobstructed by the propeller, which sits behind the cabin. Side windows easily pop in and out. Humans 6’3” and shorter should fit comfortably.

“A high goal for us is that there is a very intuitive user interface," said Hawkins of the cockpit, noting how cars and consumers are highly evolved together. “You end up designing to the same place: simplified control panels, analog gauges, GPS screen. We’ve distilled flying down to the basics.” 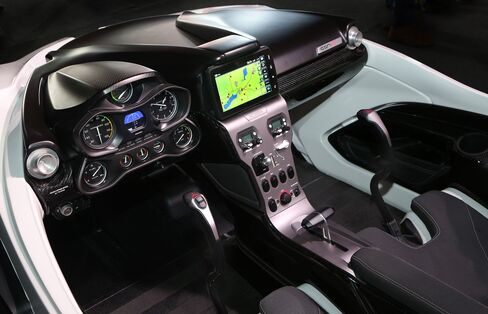 The Icon A5 cockpit takes design cues from sports cars in a bid to be easy and intuitive to operate.

The “A” in A5 stands for for amphibious, though it can also land on solid ground. The "5" just seemed like a strong, confident prime number. Like most contemporary consumer products, clean and attractive design was a key strategy. Strip out the complications, make it as easy to use as possible, and above all, keep it fun.

As a non-pilot, I certainly got the mission. Skimming the water of the Hudson in the early morning, smoothly soaring higher—windows off—I couldn’t help but feel like I was in some sort of flying car. Passing above the George Washington Bridge, with the expanse of Manhattan and New Jersey laid out ahead, was certainly breathtaking. Flying in formation with another plane, buzzing around the Statue of Liberty and World Trade Center, a one-of-a-kind thrill. Imagine taking this on a camping trip or Florida seaside home.

Though I can't afford it, I'll admit I wanted one. 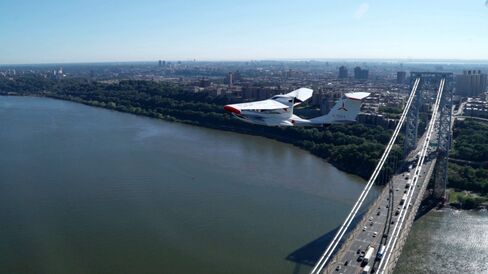 Cruising 1,000 feet over the George Washington Bridge during our NYC test flight.

Given that a Sports Pilot License requires less training, and Icon's primary strategy is targeting new pilots, safety is a paramount concern.

Two key engineering innovations of the A5 mitigate the risks. One is an easy-to-read Angle of Attack (AoA) gauge, a feature common to military aircraft but virtually unknown in civilian planes. In general terms it tells you how your wings are performing, or rather how much lift they’re providing in whatever maneuver you’re currently in. Keep the needle in the green zone, you’re good; hit the yellow zone, and an audible alarm goes off to tell you to correct; hit the red, and you’ve stalled (i.e. there’s no lift on the wings). At this point the plane starts to shake and protest physically—clearly something is wrong. 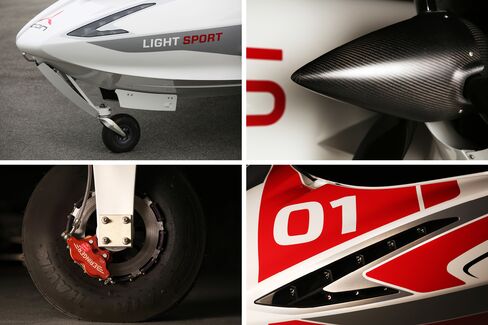 Design details of the Icon A5

This is where the second innovation comes in: a Spin-Resistant Airframe, the first to meet the full FAA Part 23 standards for spin resistance.

A main danger of a stalled plane is that it can enter an uncontrolled spin should there be any yaw (lateral) movement—say, in a turn while on approach to land, which could result in a crash; 41 percent of pilot-related fatalities are due to stall/spin crashes. In the A5, you may stall—and Hawkins intentionally did during our flight (to my chagrin) to show me this feature—but you don’t lose control or lift, and it's fairly difficult to enter a spin. (Or as I assumed might happen as a non-pilot, drop like a bowling ball.) For newer pilots, the ease of recovery is an obvious boon.

After those measures, there’s an optional rocket-powered parachute for the whole craft.

As a former F-16 pilot for the Air Force, Hawkins has the hardened demeanor and handsome intensity you’d expect from ex-military. He peppers his speech with “adventure” and “freedom” and “human experience.” To him, flying is an emotional drive. And it's that emotional aspect that he hopes to grab most with the A5—plus a slice of the $30 billion U.S. powersports industry; think speedboats, ATVs, and other gas-fed adrenaline machines. Icon estimates the nascent aviation portion of that figure is $3 billion to $6 billion and predicts more growth as the industry matures and regulatory changes spread internationally. 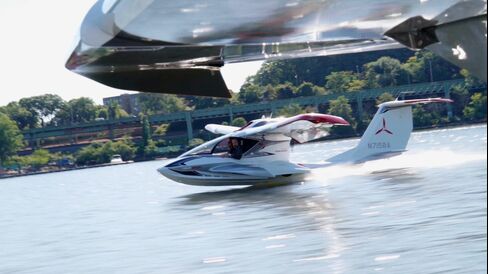 The Icon A5 can land on a runway or a river.

“Whether it be sports cars or boats or bikes, consumers are really motivated by an adventurous lifestyle,” said Hawkins.

Hawkins says he wants to inspire consumers to fly—and not just fly, but be a pilot and all things associated with that. To get there, he's taking a page from Tesla and plans open airplane showrooms, making Icon’s planes as easily accessibly as a car. With 40 percent of current sales from non-pilots, he plans to turn Icon’s own $10,000 two-week SPL training course into a fully immersive vacation, an experience in and of itself.

“Our long-term goal is to democratize aviation. Humans will move in three dimensions on a personal level. It’s in our future.” 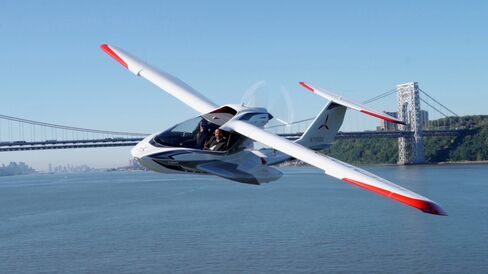 
Loading comments for The Icon A5 Is the Closest Thing to a Flying Car You Can Buy Today...