Diamond Aircraft received the Golden A’ Design Award 2020 in the category Aerospace and Aircraft Design for the twin-engine DA42-VI. A' Design Award and Competition is the world’s largest, most prestigious and influential design accolade, the highest achievement in design. A' Design Award Winner Logo, symbolizes exceptional design excellence in products, projects and services.

“We are very proud to have received the respected A’Design Award for our DA42-VI. The DA42-VI is highly valued by our clients all over the world and it’s a great pleasure to see her acknowledged by design professionals,” said Liqun Zhang, CEO Diamond Aircraft Industries GmbH, “This success would not be possible without a great team of highly passionate and experienced staff. I want to thank all of you - you have been doing an outstanding job every day - this award is dedicated to you!”

The main emphasis of the DA42-VI design was to create an aircraft, that is easy to fly and burns fuel like a conventional single engine aircraft, but with the added safety of a second engine. The aircraft’s impressive cross-country performance pleases private pilots and business owners alike, while low operating costs make it an ideal advanced trainer.

The interior of the DA42-VI was designed with the pilot and passengers in mind. Ergonomically designed and climate-controlled seats with variable lordosis support and adjustable backrest. Various luxurious, hand-made upholstering options as well as great optional interior features such as built-in tablet mount provisions or removable right-hand control stick. Further enhancing the elegant lines, are the extensive choices of standard exterior designs and the option for exterior customization.

About 1,000 DA42’s have been delivered since its introduction more than 15 years ago, outselling all other certified piston twins combined. The all-carbon composite DA42-VI is equipped with efficient, clean and reliable jet-fuel AUSTRO engines, Garmin G1000 NXi with 3-axis Automatic Flight Control System and optional electrically driven air conditioning.

The DA42 maiden flight took place on 9 December 2002 at Diamond Aircraft’s headquarters in Wiener Neustadt (Austria). One and a half year later the DA42 made the first non-stop transatlantic crossing by a jet-fuel engine powered aircraft in general aviation. The Austro Engine jet-fuel powered DA42 NG received EASA (European Union Aviation Safety Agency) certification in March 2009 and FAA (Federal Aviation Administration) certification in April 2010. The DA42-VI, the latest and improved DA42 version, with new propeller and aerodynamic clean-ups to the rudder and engine cowling, resulting in increased cruise speed performance was introduced in December 2011. 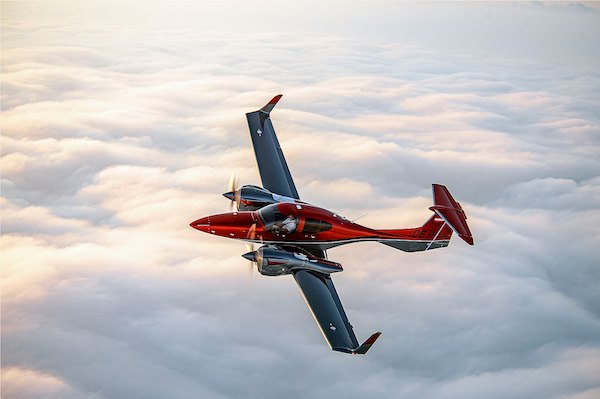