“This selection will expand upon the fuel savings we have already been realizing with the GTF engine,” said Enrique Beltranena, CEO, Volaris. “We are always looking for new ways to better serve our passengers. These GTF engines will help us further grow our network of routes and give us a strong foundation for the future.”

Volaris is a low-cost carrier headquartered in Mexico City, Mexico and an affiliate of Indigo Partners. It was also the first airline in North America to fly the A320neo. Volaris currently operates 30 GTF-powered A320neo family aircraft and a fleet of 56 V2500®-powered A320ceo family aircraft.

“We’ve been honored to help Volaris grow from its first V2500-powered flight in 2006 to the successful airline it is today,” said Rick Deurloo, Chief Commercial Officer, Pratt & Whitney. “We are proud to continue powering their growth with the world-class fuel efficiency and economics required for their low-cost operations.”

The three other airlines affiliated with Indigo Partners – JetSMART in Chile, Wizz Air in Hungary and Frontier Airlines in the United States – have each selected GTF engines to power their A320neo family fleets. Together, the four Indigo Partners airlines have committed to 619 GTF-powered aircraft.

Since entering service in early 2016, the GTF engine has demonstrated its promised ability to reduce fuel burn by 16 percent, to reduce nitrogen oxide emissions by 50 percent compared to the regulatory standard, and to reduce the noise footprint by 75 percent. 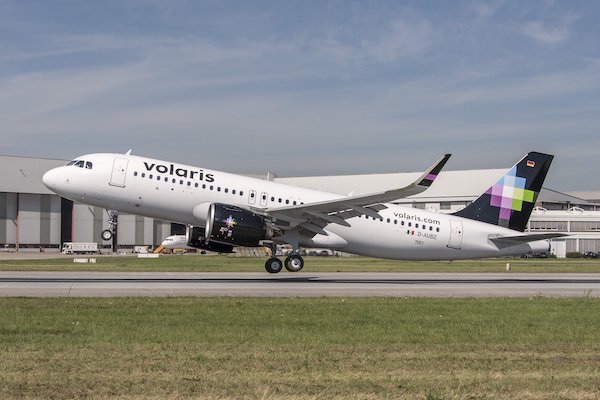