The development of electric aviation in order to meet industry sustainability goals, do you think everything goes smoothly? In fact not always. VoltAero was forced to postpone a planned demonstration flights for Cassio electric-hybrid aircraft in the Netherlands that were to promote highly sustainable regional aviation throughout the Dutch regions. The postponement was due to differences in the recognition of how experimental/prototype aircraft are registered – and accepted – by the airworthiness authorities in France (VoltAero’s home country, where its Cassio 1 testbed aircraft is registered) and the Netherlands (where the flights were to take place).

During final preparations for these flights on behalf of the Power Up initiative of Dutch regional airports in June, a mismatch between the French and Dutch aviation regulations came to the surface. The Dutch regulations stipulate that only aircraft that are registered in the civil aircraft registry are allowed to operate in Dutch airspace and at Dutch airports. In France, experimental aircraft such as Cassio 1 are traditionally not registered as normal aircraft.

A statement by the French DGAC civil airworthiness authority regarding the status of Cassio 1 was provided on request of VoltAero to resolve the issue, but it proved insufficient for Dutch authorities to give Cassio 1 permission to fly in Dutch airspace. Certain other European countries have regulations that do provide a legal option to give permission for non-registered aircraft to fly in their airspace.

Such inconsistencies between national regulations could pose a major challenge for the development of new, sustainable aircraft, stated Jean Botti, VoltAero’s CEO and Chief Technology Officer.

“It is heartbreaking to see that the joint efforts of VoltAero and Power Up have been blocked by these inconsistencies,” Botti added. “This not only is a problem for our specific demonstration flights – which would have involved just five days of flying; it could hinder the electric aviation industry’s evolution as a whole. There is a need for testing new technologies across countries and borders. We call on policymakers throughout Europe to work towards harmonized regulations to ensure that the development of new sustainable aircraft technology can be achieved as efficiently as possible.”

Power Up is a consortium that brings together key participants in an open-source learning partnership, with the end goal of introducing highly sustainable regional air transport in the Netherlands – and subsequently expanding it into other regions of Europe. The grouping brings together four of the country’s airports (Eindhoven Airport, Rotterdam The Hague Airport, Groningen Airport Eelde, and Maastricht Aachen Airport) along with the Royal Schiphol Group, the Netherlands Aerospace Centre (NLR), KLM Royal Dutch Airlines, and the M3 Consultancy.

The in-country demonstration with Cassio 1 was to have involved 17 flights, allowing the analyses of operational costs, ground infrastructure requirements and technical support for the future use of Cassio family aircraft by commercial aviation operators. VoltAero’s proven electric aircraft expertise led to its selection for these demonstration flights, becoming the first company to do so within the Power Up initiative’s framework.

Botti said VoltAero remains fully ready to bring Cassio 1 for the demonstration flights once the aircraft is accepted by the Netherlands.

Overall, VoltAero is well advanced in full-scale development of the Cassio aircraft family – to be produced with capacities of four to 12 seats. This family will provide a highly capable and reliable product line for commercial flights, air taxi/charter companies, private owners, as well as in utility-category service for cargo, postal delivery and medical evacuation (Medevac) applications.

The VoltAero propulsion concept is unique: Cassio aircraft will utilize their propulsion system’s electric motors for all-electric power during taxi, takeoff, primary flight, and landing. The hybrid feature (with an internal combustion engine) comes into play as a range extender, recharging the batteries while in flight. Additionally, this hybrid element serves as a backup in the event of a problem with the electric propulsion, ensuring true fail-safe functionality.

VoltAero has based the overall Cassio design on an aerodynamically optimized fuselage, a forward canard, and an aft-set wing with twin booms that support a high horizontal tail. It will be certified to Europe’s EASA CS23 specification as a single-engine, general aviation category aircraft, and is designed from the start for a low cost of ownership.

VoltAero is headquartered in Royan, France. Cassio aircraft are to be built in a dedicated production facility at Rochefort Airport in France’s Nouvelle-Aquitaine region. 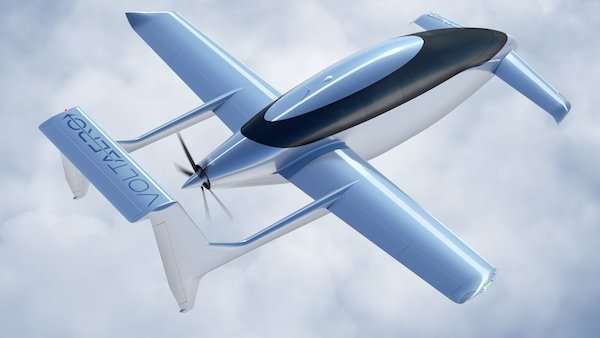